A further shoot'em up in the Darius series this time for the SuperGrafx-16/TurboGrafx. Darius Plus is based on Super Darius for the TurboGrafx-CD but with fewer bosses and was actually written for the SuperGrafx because playing it on that console results in slightly improved graphics.
Wii Shop

Darius Plus was released in Japan on September 21, 1990 for the PC Engine, and was developed by Bits Laboratory and published by NEC Avenue. The Darius series went up against the big guns of R-Type and Gradius as another side-scrolling shoot 'em up with a player-directed power-up system.

Darius Plus is essentially Super Darius, the TurboGrafx-CD version which is the closest to Arcade perfect, but with fewer bosses. The same version could also be played on the SuperGrafx and had special features that would enhance the experience when played on that system in particular - similar to how certain Game Boy games would be enhanced when used with the Super Game Boy peripheral. Darius Plus shares this bonus aspect with its much rarer sister product Darius Alpha. 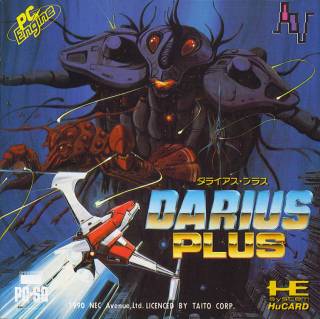