A futuristic dodgeball game with teams filled with robots, demons, skeletons, ninjas and others.

Cyber Dodge is a multiplayer competitive dodgeball game exclusive to the PC Engine. The player can compete in a tournament against a series of CPU opponents, or play a single game against the CPU or a second player.

Each of the game's teams have a special attack throw and a distinct visual design. These teams include: the Fire Bombers, humans wearing heavy football gear who are the protagonists for the Tournament mode; the Barbarians, humans who are armored like gladiators; the Shadow Knights, a team of skeletons who lose their skulls after taking damage; the Fuma, who are a team of fast-moving ninja; the Aliens, a group of extraterrestrial humanoids; the Eliminators, a group of skeletal robots inspired by the T-800; and the Darkmen, a group of ominous floating warlocks who are the final bosses in the Tournament mode.

The player can also select six different arenas in the single play modes, including a colosseum, a museum, a Japanese Zen garden, the surface of a barren planet, a dilapidated city or a futuristic stadium. 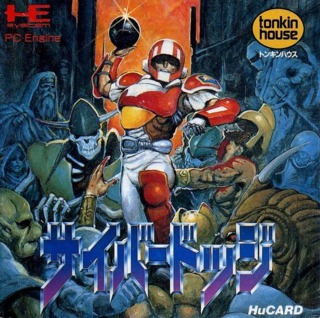