Sunset Riders is an action game from Konami that sets four bounty hunters across the Wild West to claim rewards on wanted outlaws. It began as an Arcade game in 1991, which allowed for up to four players simultaneously. It was later ported to the Sega Genesis in 1992, and the Super Nintendo in 1993.

The Arcade version was intended to be part of the XBox 360's Game Room, but it never transpired.

Sunset Riders has four playable characters: Steve, Billy, Bob, and Cormano. Steve and Billy have revolvers while Bob has a rifle and Carmano uses a shotgun. The rifle and shotgun have a slow firing rate, but fire multiple bullets in a spread. The revolvers only shoot one bullet at a time, but the bullets fire at a faster rate.

Players move on a 2D plane while being able to aim and shoot in eight directions. Some stages have two planes, an upper plane and a lower plane, that they are able to jump back and forth. Most stages pits the players going through a stage battling enemies and course obstacles until the reach the end of the level, where the stage boss awaits. Some bosses have henchmen assisting them, making the boss battle more difficult for the players to contend. Once the boss is defeated, the player is awarded the bounty on the targeted outlaw. If two players are present when the boss is defeated, the bounty is awarded to the player who hit the boss the most.

There are three stages out of the eight that differ from the other five where the players walk and battle their way to the end boss.

Stages 2 & 7: These two stages puts the bounty hunters riding on horses throughout the stage until they reach the boss at the end of the level. The players stay on one plane and navigate the level by battling enemies that ride horses along the bottom of the screen along with a wagon where an enemy tosses logs from the back of it to trip the hunters off of their horses.

Stage 4: The fourth stage is fought inside a saloon where the bosses stand on balconies at both sides of the stage with a huge chandelier hanging in the middle of the stage.

Sunset Riders features the following power-ups to assist the player in battling enemies in the Wild West.

The player can acquire the two power-ups (rapid fire, dual fire) by killing an enemy with the sack, entering doors at certain buildings, or at certain areas of a stage. If the player already has both power-ups, they will receive additional money instead.

Sunset Riders features a bonus stage that is played after the completion of the second and fifth stages. The player can aim the crosshairs and in eight locations of the bonus stage (essentially in all sides of the screen). Enemies pop in and out of the eight locations. The player earns bonus money on the amount of enemies shot in the stage.

Simon battles the bounty hunters on a balcony protected by two barrels and henchmen that appear out of the two doors next to him.

Hank battles the bounty hunters by jumping back and forth between crates across the train tracks with henchmen providing assistance.

Dark Horse battles the hunters while riding on his armor plated horse. Henchmen provide assistance by shooting at the hunters popping out of the saloon's windows.

The Smith Brothers battle the bounty hunters inside a saloon with one brother tossing lit lanterns while the other tosses bombs that explode upon impact on the ground.

El Greco battles the bounty hunters with a shield and a long whip. He also jumps around a lot to particular spots of the train to leverage his strengths against the hunters.

Chip Scalem battles the bounty hunters on an stage where he uses the three pillars on the stage's background to jump off and toss knives at them. If the hunters are near Chief Scalem on the stage, he will attack them with the knife.

Paco Loco fights the bounty hunters on top of a fortified wall while henchmen attacks with guns and bombs popping out of a tree above htem.

The Sega Genesis version of the game is considerably different from the Arcade and SNES port. Only Billy and Cormano are available to play in this version with four stages that have two parts. The first half ends with the character(s) rescuing a tied up damsel in distress, while the second half ends on a boss battle.

The four bosses in this version of Sunset Riders are Simon Greedwell, Paco Loco, Chief Scalpem, and Sir Richard Rose. Most of these bosses are similar to their Arcade and SNES counterparts, with the only difference being the Paco Loco fight, which takes place on a train.

The Genesis's bonus stage also differs from the Arcade/SNES version. Within the four stages, players can shoot objects that may yield a sheriff's star for a limited time on screen. If the player collects this star they get to participate in a bonus stage for extra lives and money. The bonus stage pits the character riding on a horse chasing after weaving stage couch where someone in the back hurls prizes towards the screen. The player can collect more than one star per level, but the bonus stage can only be done once. If two players are playing, each player must get their own star or risk being left out of the bonus level. 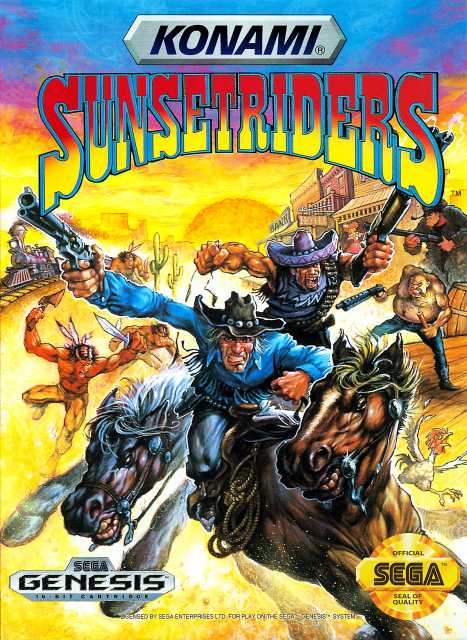