Metroid II: Return of Samus is the portable sequel to the Nintendo Entertainment System classic, Metroid. Regarded by many as one of the best action games on the Game Boy, it was a solid follow up to the original.

Metroid II: Return of Samus is an action-adventure game developed by Nintendo R&D1 and published by Nintendo for Game Boy and 3DS eShop platforms.

In the first game Samus prevented the Space Pirates from using the newly discovered Metroid race for their own evil purposes. To prevent such an incident from happening again the Galactic Federation sent teams to the home planet of the Metroid, SR388, to destroy the species. None of the teams survived, so they sent in bounty hunter Samus Aran to destroy the Metroids.

During the game Samus destroys every Metroid on the planet, discovering and eliminating each of the creature's different forms.

At the end of the game Samus defeats the final boss, the Queen Metroid. When traveling back to her ship she discovers a Metroid egg which proceeds to hatch in front of her. The floating hatchling decides to mark Samus as it's mother, and Samus spares its life. The hatching Metroid leads Samus out of the tunnels, helping her escape from the planet.

The game plays much like the first Metroid game did. The player must explore whatever part of the planet they currently have access to until they discover whatever they need to proceed further. Usually this involves finding a powerup that will allow them to bypass some obstacle that was previously impassable. However, in this game it is also necessary to destroy every single Metroid within Samus' reach. Doing so will trigger earthquakes which will affect the level of the magma that restricts Samus' progress into the deepest parts of the planet. The Metroids gradually mutate under the unstable planet's radiation and become more dangerous as the game goes on, so arming Samus as much as possible is important.

Progression in this game is fairly more linear as that of the other Metroid games. The game doesn't typically require you to back track. Unlike the first game, you can save at various points in the game.

Being on the original Game Boy the game had a monochrome presentation. The result of such a limited color pallet was added detail to Samus's suit, such as the large shoulder-guards which have since remained a consistent part of her design ever since. Other notable aspects of the presentation are the different sprites for each of the Metroid's different forms. 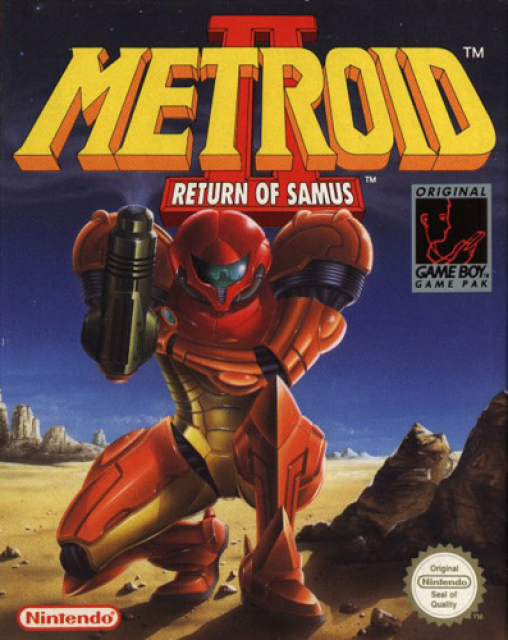