An online-focused shooter based on the tabletop RPG of the same name, giving players modern weapons as well as various magic abilities. It was the first game to allow cross-platform play between Xbox 360 and PC players on the same servers.
Xbox 360

Shadowrun is an online multiplayer-focused first-person shooter by FASA Studio, based on the pen-and-paper Shadowrun universe. It is most notable for supporting cross platform multiplayer between its PC and Xbox 360 versions. Shadowrun was the last game created by FASA Studio, which shut down after the game's release to largely mixed reviews and poor sales.

Shadowrun is mainly a first-person shooter (3rd person when using a katana, or with smoke activated) introducing mild cyberpunk elements to the gameplay. The game takes place in Brazil in the year 2031: before the events that shaped the Shadowrun universe. The player is assigned one of two factions to play as: The megacorp RNA Global, or the resistance group known as The Lineage. Playable races are Human, Elf, Troll, and Dwarf. Each race has their own unique racial traits. The game offers online multiplayer for up to 16 players on nine maps (with three smaller versions for 8 players), system link and solo play against bots is also available. There are six training missions that cover basic to intermediate gameplay as well as training for dwarves, elves and trolls. The online component is divided between Public Matches and Private Matches. A Public Match is essentially streamlined matchmaking, the player has few options to choose games, map preferences and player size being the only two options. Shadowrun uses Microsoft's Trueskill ranking system to match players in Public Matches, there is no consistent stat-tracking or leaderboards, but the in-game stats are very comprehensive and detailed. Private Matches are private games set up by players, players set up a game lobby, set the map, a few game options and can choose teams and race(obviously). Private Matches can only be accessed by invite or joining through a players gamercard in the Xbox guide. Note: Achievements can only be earned in a game with at least 4 players on each team in either Public or Private Matches, online or LAN. Shadowrun does not support any split-screen play.

Players can purchase magic, tech, and weapons at the beginning of each round of play. At the beginning of the first round they have $2000, except humans who have $2500. Each new round adds $1400 for each player, plus money the player earns by helping his or her team during each match, whether through killing enemies, supporting friendlies(rez, healing with trees, assisting in kills), or focusing on the objective. Money can also be lost by team killing or damaging during the round. Rounds are either won by killing all enemies(all game modes), scoring the artifact, or defending artifact(in Raid). More money is earned when teams score the artifact in Extraction and Raid, or if the defenders defend the artifact by the rounds end in Raid, and finally, in Attrition the team who posesses the artifact at the end of the round will win and earn more money. Matches are a best of eleven series, first to six wins.

The game lacks a traditional campaign mode. Instead, various match types are available - solo play against bots, private matches (online or LAN), and live matches which match up players from around the world. The three play modes available are Attrition (Team Deathmatch variant), Extraction (Neutral Flag), and Raid mode (One flag, attack/defend CTF). Each map has two of these three game modes, usually Raid or Extraction and Attrition. Raid being the most common. Some maps also have a reduced-size variant which is reserved for smaller games.

Shadowrun requires 3.9GB of space to install on an Xbox 360 HDD. This decreases map loading time by 15-20%. 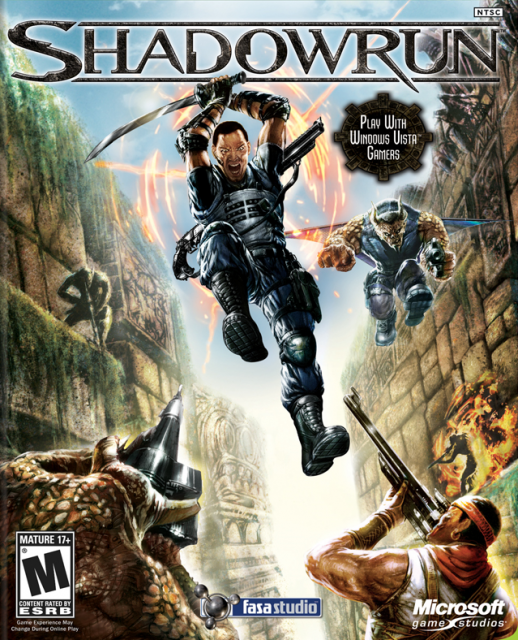