In this cute and bizarre puzzle-platformer, players take control of Spanky the Monkey as he bursts his balls to knock out fruits. It'll make sense, trust us.

Spanky's Quest is a comedic single-screen puzzle-platformer developed and published by Natsume for the Super Nintendo Entertainment System and Game Boy in 1991-1992. The Game Boy version was originally released in Japan (as Lucky Monkey) on April 26, 1991, while the SNES version was originally released in Japan (as Hansei Zaru Jirou-kun no Daibouken, or "The Great Adventure of Meditative Monkey Jiro") on December 27, 1991. Both versions were released in North America on July 1992 and in Europe (by Taito) sometime in 1992.

While both versions differ in various ways, the overall concept is the same: players guide an anthropomorphic monkey (humorously named "Spanky" in the Western releases) around multi-layered playfields as he climbs his way up multiple towers to defeat the evil witch Morticia, who has turned all the fruits and vegetables of the kingdom of Mopoland into fiendish monsters. His sole weapons are magical balls (bubbles in the SNES version) which stun enemies and grow as they bounce on his head. He can burst these balls at any time, forming one of four types of "ball blasts" (depending on the ball's size) that damage all enemies they touch.

The original Game Boy version was more oriented towards arcade-style action, similar to Bubble Bobble and Snow Bros.: Nick & Tom. In this version, Spanky progresses through each stage by defeating all enemies. This version includes bonus score pickups, including special "letter" pickups (formed by eliminating more than one enemy with the same blast) that allow access to the bonus stage once the word SPANKY (MONKEY in the Japanese version) is formed.

The SNES version changes the formula to be more puzzle-oriented, as Spanky must now unlock doors with keys scattered throughout each playfield. Much of the game's assets have changed, with larger, more different stages, a new appearance for the titular monkey, bubbles that change color as they get larger, and ball blasts taking the form of different sports balls (baseballs, soccer balls, volleyballs, and basketballs). This version includes new power-ups (in the form of wearable hats) and traps and obstacles, such as secret blocks breakable by un-popped bubbles (some of which reveal secret doors for the bonus stage) and cannons that send Spanky and his enemies to a different part of the stage.

The Western releases of the SNES version received multiple changes, including a new introduction cut-scene, the absence of the map screen, and an updated ending cutscene. Some of the stage arrangements were changed, as the tutorial stages of the first Tower were replaced by the stages of the second Tower, with the second Tower now comprising of new stages. This version was later digitally re-released for the Nintendo Switch in Western regions on May 26, 2021 as part of the Nintendo Switch Online service. 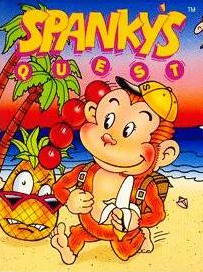