The ninth entry in the main Assassin's Creed series sees the franchise go to Egypt in the 1st century BC. Playing mainly as the Medjay, protectors of the Pharoahs, Bayek, the player takes on quests and explores Egypt. A departure from all previous entries in the series the developers took inspiration from games like The Witcher 3 Wild Hunt and Dark Souls while keeping many elements from the series as a whole, including some present day sequences.

In the present day, Layla Hassan, a researcher at Abstergo's Historical Research Division, is tasked along with her friend and co-worker Deanna Geary with finding and retrieving an artifact in Egypt. However, she instead finds a tomb containing the mummies of ancient Assassins Bayek and Aya. Hoping to find any relevant information that would secure her a position in the company's Animus Project, Layla decides to relive both Bayek and Aya's memories using her modified Animus without telling her superiors, despite Deanna's protest.

In 49 BCE, Bayek, a respected Medjay in charge of protecting the Siwa Oasis, is abducted along with his son Khemu by a group of five masked men to an underground vault in the Temple of Amun. The masked men give Bayek a golden orb and demand that he use it to open a secret Vault. Khemu helps Bayek escape, but during the struggle to kill one of the masked men, Bayek inadvertently stabs Khemu in the chest, killing him.

One year later in 48 BCE, Bayek had exiled himself from Siwa in order to track down the five masked men to take his revenge. He finds the first one, Rudjek "The Heron," and kills him. Bayek then returns to Siwa to kill the local priest Medunamun, "The Ibis," who has been torturing Siwans for information to open the same vault. After killing Medunamun, Bayek then heads for Alexandria, where Aya has been tracking another of the masked men. Upon meeting Aya, she reveals that she has already killed Actaeon "The Vulture" and Ktesos "The Ram," leaving only one target left, "The Snake." Aya also reveals that she has been working with Apollodorus the Sicilian and Cleopatra to uncover The Snake's identity. She gives Bayek the first Hidden Blade, which he uses to track down and kill Eudoros, whom he believes to be the "Snake" in a bathhouse. Killing Eudoros costs Bayek his left ring finger, cut off from the same hidden blade to kill his target.

Bayek remembers Eudoros' words and begins to have doubts. He decides to meet with Apollodorus and Cleopatra for answers. Cleopatra tells Bayek that she was ousted from the throne by the masked men, who call themselves the Order of Ancients and seek to control all of Egypt by using Ptolemy as their puppet. Also, there are more members of Order than the five Bayek and Aya had already killed: "The Scarab," "The Hyena," "The Lizard" and "The Crocodile." In fact, Eudoros was actually "The Hippo," and the name of the Snake is used to refer to the Order as a whole. Confronted with this new information, Bayek agrees to become Cleopatra's Medjay and assassinate the remaining members of the Order. Bayek tracks down and kills all of them while Aya convinces Pompey the Great to ally with Cleopatra.

In the present, Layla and Deanna are attacked by Abstergo soldiers for failing to check in with the company. Layla kills her attackers, but Deanna is captured and executed. Swearing revenge, Layla returns to the Animus, determined to complete her mission.

Bayek receives a letter from Aya explaining that there are two more members of the Order, "The Scorpion" and "The Jackal," who are members of Ptolemy's royal guard and the likely culprits responsible for Khemu's death. He finds out that Lucius Septimius is the Jackal and tracks him, but is too late to stop him from assassinating Pompey. With no other options, Cleopatra has Bayek and Aya help sneak her into the palace to meet Julius Caesar. Cleopatra impresses Caesar and secures his support. Bayek kills Pothinus, "The Scorpion," but is stopped from killing Septimius by Caesar. Aya watches Ptolemy get eaten by crocodiles when he tries to flee across the Nile.

After the end of the civil war, Cleopatra takes the throne as Pharaoh. Septimius becomes an advisor for Caesar and Cleopatra cuts ties with Bayek and Aya. This causes Bayek and his supporters to realize that Cleopatra and Caesar have now allied themselves with the Order. Realizing his mistake in supporting Cleopatra, Bayek gathers his allies to form a brotherhood to counter the Order and defend the free will of the common people. Bayek and Aya realize the Order showed a keen interest in the tomb of Alexander the Great, which they investigate. There, they find a mortally wounded Apollodorus who warns them that Caesar's lieutenant, Flavius, is "The Lion" and the true leader of the Order. He and Septimius had taken the Orb, and a Staff from the tomb and are heading back to Siwa for the Vault.

Upon returning to Siwa, they find the Vault already opened. Bayek tracks down and confronts Flavius, who bears the activated Apple of Eden, but kills him, avenging Khemu's death. Bayek returns to Aya, who has recruited Marcus Junius Brutus the Younger and Gaius Cassius Longinus to their cause. She plans to head to Rome with Brutus and Cassius to assassinate Caesar and Septimius. Bayek and Aya part ways but form the foundation of the Assassin Brotherhood when they both swear to protect the world from the shadows. Upon their separation, Bayek drops his eagle's skull charm, a necklace of Khemu's, into the sand which leaves an impression, becoming the icon of their new Brotherhood.

After this, Layla wakes up from the Animus to find William Miles, present-day Mentor of the Assassin Brotherhood watching over her. She accepts William's offer to work with the Assassins, but stops short of actually joining them. The two depart for modern-day Alexandria.

In Rome, Aya confronts Septimius, who wields the Staff of Eden, and she kills him. She then infiltrates the Roman Senate and assassinates Caesar. Later, she meets with Cleopatra and warns her to be a fair ruler or she will return to assassinate her. Afterward, Bayek and Aya (now calling herself Amunet) begin recruiting and training other Assassins as they build the Assassin Brotherhood in Egypt and Rome respectively.

Bayek learns of a Roman camp to the north of Siwa from a Roman scholar named Otis. While there he discovers that a Roman General is planning to bribe various Greek and Egyptian officials to set up a communication network. Bayek stops the bribes, but when he goes to seek out Otis, he finds that he has been killed. Bayek finds a final note from Otis, explaining that the plot was coordinated by General Rufio and that Otis was working for Amunet.

Four years later Bayek receives a letter from Tahira saying that the region of Sinai is at war with Rome and that two members of The Hidden Ones have been killed in a massacre. Traveling to the region, there Bayek meets with Tahira, who introduces him to the Gamilat, the leader of the rebels. The three plan to draw out General Rufio, the leader of the Romans in the area, by killing his three lieutenants.

While the three are successful in doing so, their hideout is discovered by the Romans. An attack causes Bayek and Tahira to be captured. Before Bayek can be killed Amunet saves him. The two go back to rescue Tahira, but she succumbs to her injuries afterward. Amunet tells Bayek that the Sinai branch of The Hidden Ones has been too loud, to the point where she was aware of their existence in Rome, and that there may be a traitor among them. The two discover Rufio's men burning down a village and stop them before assassinating Rufio.

Amunet then informs Bayek that Gamilat has been provoking Roman soldiers into combat, then hiding his rebels among villages to cause massacres. This creates new insurgents, thus bolstering the size of his army. Horrified by this, Bayek confronts Gamilat, who believes he was in the right to do so. Bayek kills Gamilat, who comes to regret his actions while dying. Afterward, Amunet and Bayek decide to form a creed with the other Hidden Ones, to swear they would not become like Gamilat and exploit innocents for their own cause. Amunet chooses to return to Rome, while Bayek remains in Egypt.

The Hidden Ones is a story-driven expansion that sheds more light on the rise of the Assassin Brotherhood. It is set four years after the events of the main game and takes the player to the new Sinai Peninsula region, where they'll have to "investigate a clash between a rebel faction and occupying Roman forces." In addition to the new story chapter, The Hidden Ones introduces a variety of new items for the player to acquire, including an outfit, two Legendary weapon sets, a pair of mounts, and other weapons. The expansion also raises the game's level cap to 45.

The new educational mode lets the player choose between free roaming the world of Ancient Egypt to learn more about its history and daily life, or embarking on guided tours curated by historians and Egyptologists. However, this disables the storyline, side-quests, conflicts with enemies, time limits, and gameplay constraints. Discovery Tour was released on February 20, 2018.

The Curse of the Pharaohs

Development of Assassin's Creed Origins started in early 2014, after the completion of Assassin's Creed IV: Black Flag. The series had been following a yearly release cycle, but after the launch of Assassin's Creed Syndicate in 2015, Ubisoft chose to delay the release of Origins until 2017. Ubisoft CEO Yves Guillemot cited a desire to focus on the quality of the individual titles, the opportunity to develop future games with new engines, and the disappointing sales of Syndicate as the reasons behind the decision. The team enlisted Ubisoft Kiev to develop the PC version in parallel with the console versions.

Information on Origins, then titled Assassin's Creed Empire, first leaked in January 2017, showing several screenshots of a character on a boat and in front of a cave. The game was officially revealed on June 11, 2017. It was developed using the latest iteration of the AnvilNext engine. During the production of Assassin's Creed III in November 2011, Ubisoft conducted a fan survey exploring potential settings for future titles. Ancient Egypt was one of the most popular choices, but Alex Hutchinson, the creative director of Assassin's Creed III, dismissed the results as he considered Ancient Egypt—as with the other two chosen settings, feudal Japan and World War II—as being "the worst choices" for the setting. The development team hired Egyptologists to assist in making the open world more accurate to the time period. 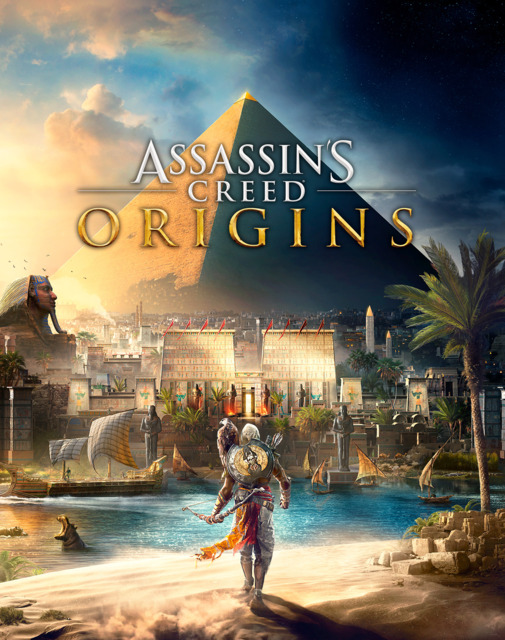