Take on the role of a paratrooper in the US 82nd Airborne Division during World War II. Fight to retake control of Europe during several key campaigns in Italy, Netherlands, France, and Germany.
Xbox 360 PlayStation 3

Medal Of Honor: Airborne is the 11th installment of the long running Medal Of Honor series. It is a World War II First Person Shooter and is developed by EA Los Angeles. MOH: Airborne was released world wide during the first week of September 2007 for the 360 and PC. A PS3 version was released on November 21, 2007. The game makes use of the Unreal Engine 3. Airborne lets players play in a non-linear fashion. This is the first time that a game in the MOH series has employed non-linear gameplay.

In the single player campaign the player takes the role of Private First Class Boyd Travers, a paratrooper in the US Airborne Division. There are a total of six missions, each with multiple objectives. Several badges and other bonus achievements can be unlocked on the successful completion of each primary and secondary objectives. The missions take place in various parts of Italy, Netherlands, Germany and France.

One innovative feature in Airborne is parachuting. Before any mission starts, the player will jump out of an airplane several hundred feet above the ground. From there, they are free to land wherever they want on the battlefield, allowing the player to tackle the objectives in any order they like. The safe landing zones are denoted by a green smoke, and it is always recommended to land in such areas. These areas also have boxes of health, ammo, and explosives to stock up on, but they can only be used once. Land anywhere else and the player will likely be greeted by a horde of Nazi soldiers. The player can also strategically land on roofs in enemy territory to easily pick off enemy soldiers in the area.

A large number of weapons are available in Airborne. The player starts out with a small selection of these weapons, and more can be unlocked by picking them up during missions. Before every mission the player is able to select the weapons they start with. This includes two primary weapons, a sidearm, and grenades, which the player can hold up to 21 of. There is also a performance stat system, that will keep track of all the kills, accuracy and other combat related statistics. When the player kills a set number of enemies with a weapon, they will be awarded a badge that signifies an upgrade for said weapon.

Each weapon, including grenades, have three badges to be awarded. The upgrades include reduced weapon recoil, higher zoom, faster reloading, higher ammo capacity and more. Furthermore, most upgrades will alter the weapons appearance. For example, when the Thompson receives the ammo capacity upgrade, the regular straight magazine is replaced with the iconic drum magazine. The single player campaign is overall 10-14 hrs long. Airborne's replay value is much higher than previous MOH games due to the ability to start levels almost anywhere on the map, and the ability to upgrade every weapon in the game.

Unlike the single player campaign, the multiplayer lets players play as both Allies as well as Axis. Airborne offers 6 different multi-player maps and a maximum of 12 players can battle it out. Airborne provides three multiplayer modes:

Patches: Three patches have been released so far : 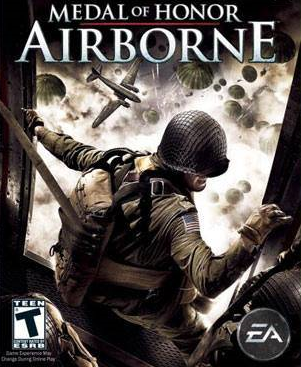