When the terrorist group GELDRA resurfaces to cause chaos, the secret agents "Rolling Thunder" must also return to stop them in this sequel to the arcade run-and-gun platformer Rolling Thunder.

Rolling Thunder 2 is an espionage-themed side-scrolling platformer-shooter developed and released by Namco for arcades on March 1991.

A sequel to the 1986 game Rolling Thunder, Rolling Thunder 2 builds on the style and gameplay of the original with improved graphics and audio, more varied stages (including vertical-oriented segments), and the option for two-player simultaneous multiplayer (with one player as female agent "Leila" and the other as male agent "Albatross").

The game's story is set sometime after the original, where investigation involving mysteriously-destroyed satellites point to a resurfacing of the terrorist organization GELDRA. It's up to the two secret agents of the "Rolling Thunder" team to investigate and put a stop to GELDRA's plans.

The game later received a first-party port for the Sega Genesis, released in Japan on November 1991, in North America on January 1992, and in Europe on April 1993. While nearly identical, it is notable for adding new stages, new weapon power-ups, a password system, and new cutscenes and plot elements. This version later received a digital release for the Wii (as a Virtual Console title) on December 4, 2007.

The original version of the game was later digitally re-released for the Wii (also as a Virtual Console title) in Japan on October 27, 2009. It was also included in both Namco Museum and Namco Museum Arcade Pac for the Nintendo Switch, as well as the Namco Museum Mini Player handheld console. 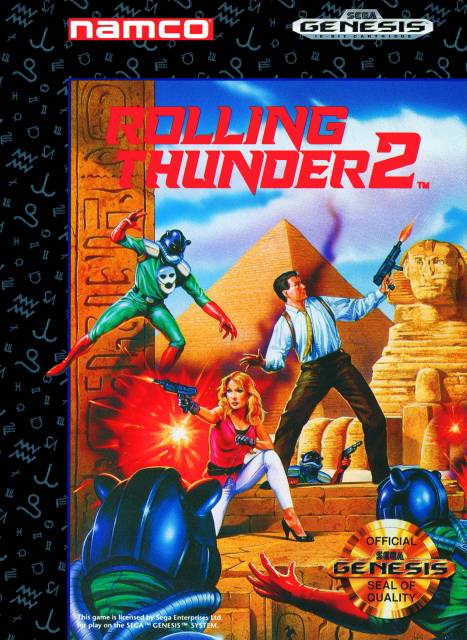