Killer Clowns is an electrifying combination of inspirations from the arcade classic: Berzerk, and the 80's cult classic film: Killer Klowns from outer space.

Then blended together with elements from Dead space, Hotline Miami and Smash TV. Killer Clowns focuses on keeping the player aware of their location, as well as watching the enemies around. Because the walls are electrified.

Killer Clowns was developed and published by Ettinsoft.

Killer Clowns offers 7 different difficulties, 4 player coop/cutup, 2 game modes, 6 bosses, 62 levels, and other options to enhance the experience such as: Hardcore mode, Darkness adjustment, Freeplay mode, and E-Z-Walls (for those who find electric walls too hard).

Killer Clowns is a top down arcade themed game, with 2 game modes to play.

The player must escape a freshly infested spaceship in order to make it back to their space cruiser in the docking bay. All the while, being hunted the in each of 5 corridor by giant flaming clown heads called Jugularnauts, as well as an endless number of hostile alien clowns. Escape mode is 50 levels long, with 5 bosses. To proceed through levels, the player has to either kill all the clowns in the room, or run away from the room 2 times. Each level has a chance of spawning Hypos that will help the player progress through the room, as well as a chance of spawning Cotton Candy Cocoons. The player starts with 3 lives, and is able to obtain more through earning score, as well as finding 1up Helmets, which is shared. If all players drop to 0 lives, they will be promptly poked fun of by the clowns, then input their initials into the high-scoreboard. Some score can be shared, such as: shooting the Jugularnaut 5 times and clowns killing themselves or each other. 1 up helmets are shared with all players as well.

If the player count is set to 1, this mode is set to hardcore survival. Meaning the player has 1 life and must reach the target score whilst locked in a room with randomly spawning clowns and a Jugularnaut who randomly crosses the room.

If the player count 2 or more, this mode is set to cutup mode. Where player's must compete for the target score. Anything and everything is a target, and player kills reap the highest reward. Respawn is turned on in this mode. Upon death, players will instantly spawn back into the room, marked by a rainbow ring.

All of the common clowns are combustible, meaning instant death if touched. This works in the player's advantage as well however, in the fact that most of the common clowns, save for the Robuster, die in a single shot. However, clowns have a chance of spawning as flaming clowns, who require an additional shot to take down. Also, the clowns do not abide to the laws of friendly fire. This works well in the player's favor.

The Jugularnauts are the leaders of these alien clowns. These giant flaming clown heads will hunt the player down relentlessly throughout the base. When encountered in corridors, they will simply chase down and eat the nearest player, and take a total of 10 shots to scare away. When encountered in a sealed room however, they use patterns and spawn in randomly chosen clowns to aid in combat, as well as taking a total of 15 shots to terminate. The Jugularnaut also pukes up Cotton Candy Cacoons.

Set in the distant future, Killer Clowns follows the surviving security team members of a planet cracking spaceship, the U.S.S. Andromeda, which was attacked by a circus tent shaped UFO while collecting resources for earth. Their only chance at survival, is to cut through an endless army of hellish harlequins in an attempt to find their way to the docking bay and escape on their space cruiser. Can they escape? Or is it all some kind of sick joke?

Most of the story is told through optional hidden PDAs, which the player can access using the action button when standing over them. Some of these PDAs have secrets about them...

Story is also told through small details hidden on the level and the intro and final cutscenes.

Scene 1: Late To The Party

Level 5: The End Is Nigh

Level 7: You're All Outta Gum 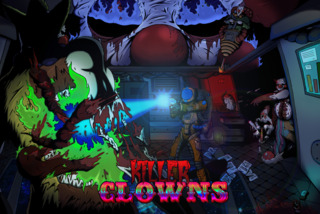