Hitman: Contracts is the third entry in the Hitman series. A wounded 47 seeks refuge in a shoddy apartment. As he floats in and out of consciousness, he recalls a number of his past missions.
PlayStation 2

Agent 47, a mysterious legend in the assassin trade, is severely wounded and about to die. Being a smart fellow, he seeks refuge in a hotel to get aid from a doctor, but the pain is causing him to have feverish nightmares. Right there, in the dark apartment with the rain pouring down outside, he remembers some of his missions.

Hitman: Contracts continues the gameplay elements that made the first two games so popular. You're still a hitman who has to either rely on stealth or weaponry to take out his targets, and there are a lot of weapons to utilize! Unfortunately, players are encouraged to take a more careful route, as there's a rating system that acts as an incentive for stealthy play. You can only get the title "Silent Assassin" if you manage to kill your targets - and only your targets - without triggering any alarms or making anyone suspicious.

Aside from the more straightforward ways of killing targets such as gunplay and strangulation, several missions allow the player more subtle ways to eliminate hits. For example, poisoning food and drink, or "accidents" involving the environment, e.g. falling from a balcony or dying from an excess of steam in a sauna. Contracts continues the trend of " context sensitive" actions, which means that one button is used in multiple situations for multiple uses. For example, when the player is near a door, the context sensitive button will allow the player to perform door-relevant actions such as keyhole peeking, lock-picking, and simply opening it, but when the player is near an unconscious individual, the same button will allow the ability to either acquire the person's outfit or drag the body to an area where it can be hidden from guards.

Along with the context sensitive button, the suspicion meter returns as well; this meter informs players of how close they are to blowing their respective cover. Such actions like excessively running indoors, brandishing weapons openly, residing in restricted areas, or sneaking, can raise suspicion. As previously stated, if the suspicion meter fills, guards will open fire on sight of the player and the current cover becomes useless. Disguises can be either found in the environment or taken from indisposed bodies and can be used to access areas restricted to most individuals in a level. Guards can see through your disguise if you are careless, e.g. if guards in a level are all wielding shotguns, then if the player assumes the guise of a guard and is not armed with a shotgun, he will draw suspicion and potentially blow his cover.

This is the first mission of Hitman: Contracts, it picks up where Hitman: Codename 47 ended. Agent 47 has killed Dr. Otto Wolfgang Ort-Meyer. in the sanitarium basement and Agent 47 must make his escape. Escaping will be no small feat. 47 must reach the front entrance and reach a car parked on the parking lot. Meantime the police storm the building and will kill any sanitarium staff they encounter. The SWAT team primary target is 47. Agent 47 won’t be confronted by the police if he is disguised as a facility patient or as a SWAT team member.

The self-appointed “Meat King”, Cambell Sturrock is the owner of Romania’s largest meat-packing facility. Sturrock was recently charge with abduction and probably murder of a woman. Andrei Puscus, Sturrock’s lawyer, got the case dropped on some small technical details and their suspicion on some bribes that put the case in their favour. Nevertheless, good news for Agent 47 is that the Meat King is having a party to celebrate their success in the courtroom. The woman that was kidnapped is your client’s daughter. The client’s wishes are that both the Meat King and the Andrei the lawyer assassinated. His daughter is to be safely returned.

A rare opportunity has presented it self for Agent 47. Fabian Fuchs is one of the infamous Fuchs terrorist brothers ( Franz Fuchs is his brother). Fabian is going to strike a weapons deal for the first time with Commander Sergei Bjarkhov. The secret meeting will take place at the Commander Bjarkhov’s marine base in Kamchatka in Siberia. Fabian is planning to buy a dirty bomb from the commander. Commander Bjarkhov has converted one of his submarines into a dirty bomb creation facility. The submarine is very large and it is docked near Commander Bjarkhov’s personal vessel. The client going to pay top dollars for Agent 47 to infiltrate the heavy fortified marine base, assassinate both Fabian Fuchs and Commander Sergei Bjarkhov. The client also wishes to destroy the large submarine where the dirty bombs are made. The agency has stationed a man inside the marine base that goes under the code name, “Yurishka”. The man can provide further intelligence when Agent 47 arrives. Agent 47 will under this assignment use the code name, “Mr Byrd”.

Rugert Van Leuven, boss of a biker gang. He is hanging out in Rotterdam in the Netherlands, Europe. Rugert has come to possess some incriminating photographs. The photographs are evidence that show that the client involvement in some illegal acts, the client wants Agent 47 to retrieve them. Rugert has put up the photographs for auction and highest bidder is a journalist named Klaas Teller. They have scheduled a meeting shortly.

Boris Ivanovich Deruzhka, the international arms smuggler, is attempting to purchase a nuclear bomb. The attempt to buy the atom bomb is from the same biker gang that Agent 47 encountered in his last mission. The deal is planned to take place on board Boris’s coaster ship at Rotterdam harbor. The bikers have hidden the nuclear device in a car trunk. The package will be delivered soon to Boris ship. The bikers and Boris does not know that the Rotterdam police know about their plot. Heavily armed SWAT teams are prepared to storm the ship. The police plan is take Boris alive. But Agent 47’s client wants the weapons smuggler Boris dead, so Agent 47 must assassinate the weapons smuggler before he’s taken into custody. Rotterdam’s citizens will be thankful if Agent 47 manage disarm the nuclear bomb, thou this is not a required objective. Assassinating Boris Ivanovich Deruzhka is your primary objective

7. Traditions of the Trade

Once more Agent 47 run into the Fuchs terrorist brothers. Franz Fuchs has constructed a very dangerous Chemical bomb, it is planned to destroy a large official building. Franz's brother, Fritz Fuchs, is keeping the bomb at his denist office at the Thermal Bath Hotel in Budapest, Hungary. Agent 47's client wants both brothers killed and the bomb retrieved for study and analysis.

A rich client has been in contact with Agent 47's agency. The client wants Agent 47 to get at the leader of Hong Kong’s Red Dragon Triad, Lee Hong. The mission is to frame the Blue Lotus Triad for the killing of one Lee Hong's closet and top men. This will provoke a gang war between the two rival triads, which in turn will weaken Lee Hong. The Red Dragons and Blue Lotuses sometimes do business with one another. Agent 47 job is to assassinate the Red Dragon Negotiator during the meeting with the Blue Lotus Negotiator at Chiu Dai park. Agent 47 must also make sure that the Blue Lotus Negotiator survives. Otherwise he can not be blamed for the murder if he is dead.

The Red Dragons and the Blue Lotuses haven been dazed by the latest events, neither side thought that it would go wrong during their latest business deal at Chiu Dai Park. The Blue Lotus Triad is putting all their hope to mend the current events by meeting with their counterparts at Red Dragon turf. They will have peace negotiations at Lee Hong’s own Wang Fou Restaurant. Your current client wants Agent 47 to assassinate all six members of the Blue Lotus Triad along with the Blue Lotus Negotiator. This to make the appearance that the Red Dragons are responsible for the hits, which in turn makes the two triads to start a costly gang war and further weaken the Red Dragons almost untouchable leader, Lee Hong.

**. Will not be found during a frisk if Agent 47 is disguised as a butcher.

Handguns are the most versatile weapons in the game; they are lethal and concealable. Pistols come in four varieties:

The ability to duel wield is generally accomplished by completing missions with a Silent Assassin rating.

Submachine guns are generally automatic firearms that use smaller calibre ammunition than assault rifles. In Hitman: Contracts some SMGs can be concealed and some have silenced variations.

Assault rifles are deadly at any distance, fully automatic weapons that feature large ammo capacities. The downside is that Agent 47 cannot conceal assault rifles, this forces you to carry them in the open. If Agent 47 utilizes a proper disguise, he will not attract unwanted attention.

Shotguns fire shots with dozens of small pellets and are lethal when used at close or medium distances. A drawback there is no way to silence a shotgun. Shotguns are most practical when you already have caused a alarm and need to shot yourself out of a situation.

Sniper rifles allows Agent 47 to plan and take out targets at great distance from a secure and safe position. All sniper rifles features a powerful scope that makes the perfect shot possible.

When noise and attention doesn't matter. Agent 47 can then bring in the big guns.

How to unlock Minigun and Dual Gold Desert Eagles

In Mission 9, "The Wang Fou Incident", look for a hidden elevator not marked on your map, and go down into the basement of the restaurant (The stairs are also an option). Follow the underground passages until you come to another elevator. Once inside, select the option "Mansion" on the elevator button. Once you are in the mansion section of the map look around until you find an office. On the desk is Orthmeyers Key card. Now beat the mission anyway you can and make sure you save your game. When you beat the game and are able to replay missions go back to Mission 1, Asylum Aftermath. Once you exit the winding hallway where you started look to your left and you will see a locked metal gate. Unlock the gate with Orthmeyers key cardI and you will find a demented patient walking with a minigun. Take it. You will also find the dual gold plated Desert Eagles in another locked room after you make your way through the hallway with the mirrors. Beat the mission with these weapons in your Inventory and they will be added to your Weapons Cache.

The Xbox version of Hitman: Contracts is backward compatible with the Xbox 360, however the game does not function when the console is set to 1080p, requiring the resolution to be set to 1080i or lower.

Hitman: Contracts was re-released with high definition visuals as part of Hitman: HD Trilogy on January 29, 2013. It was also made available as a standalone 2.38 GB download on the PlayStation Network for $16.99. 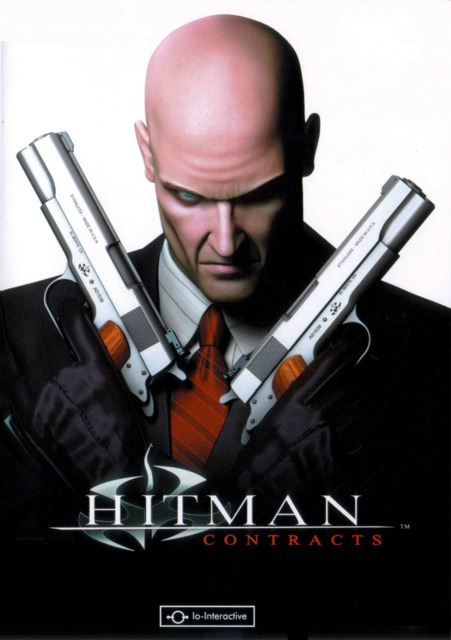