"A super saga of 23rd century satellite warfare!" A Super Nintendo horizontal shoot 'em up developed and published by Jaleco.

Earth Defense Force is a side-scrolling shooter that was originally released into the arcades. A version was later ported to the Super Nintendo that lacked two player co-op play but had new weapons. The game was developed and published by Jaleco.

The universe has been at peace for the last two thousand years due to the creation of the Union of Federated Planets, which was formed to promote harmony and understanding between all the different races. But recently a mysterious organization known as AGYMA has been plotting to gain power and cause chaos. AGYMA has been provoking nearby planets that used to have feuds until the formation of the Union of Federated Planets, now these once peaceful planets are attacking each other again. If left unchecked, AGYMA could wreak havoc and destroy the now peaceful universe.

However, the Galactic Intelligence Force has infiltrated the AGYMA and learned of their next move. AGYMA plans to annihilate Earth, home to the Union Council, and they've already set up home bases on Earth and the Moon. Of course, for every villain there is a hero and luckily the Earth Defense Force (E.D.F.) is here to save the day.

The player is a member of the E.D.F. and has volunteered to take down AGYMA singlehandedly. Piloting the latest the E.D.F. has to offer, the XA-1, the player will be in command of eight different weapons and two small satellite ships. The task at hand is difficult though; the player will have to pilot their way to their bases and destroy six separate bosses, all on their own.

An interesting note: the back of the US box provides the quote "A super saga of 23rd century satellite warfare!" while the US manual states the game takes place in the year 4129. Conflicting dates indeed.

There are six stages in the game, each with a boss fight at the end and even some with a mini boss. The player starts out with four ships with each ship being able to sustain three hits, lose all ships and it's game over. Before each stage there's an opportunity to chose from one of the eight available weapons (see below), as well as upon death or after completing a stage. While shooting down enemies the bar at the top of the screen increases - that's XA-1 gaining experience. From level one to five, the ship will become stronger with each enemy killed. The satellites will level up as well, more on that later. It's also possible to change the ship's speed at will.

The first encounter with the AGYMA is a daylight mission over Earth. Fight a mini boss before making it the level boss as well as hundreds of individual enemies just as capable of taking the XA-1 down.

Night has fallen over Megalopolis and it's up to the XA-1 to reclaim the city from AGYMA while facing off against enemies with plasma beams and ripple lasers.

The third stage takes place in an underwater cave that the AGYMA has converted to a hidden base. Fight a mini boss as well as the level boss.

After cleaning up AGYMA's forces on Earth, the XA-1 heads to their Moon base but not before taking on fleets of their soldiers.

While getting ever closer to their Moon base, the XA-1 will need to take heed by dodging a meteor shower as well as a mini boss and level boss.

After finally making into the headquarters it's time to face the toughest challenge yet.

A shot spread out in a fan-shaped pattern

Concentrated shots cause severe damage at the point of impact.

When an atomic shot hits an enemy ship or is hit by enemy fire, it explodes over a wide area and engulfs all enemy ships around it. Not effective against laser fire.

Shots home in on enemy ships.

Shots explode on impact and destroy all enemy ships in the area.

Slow, powerful shots that home in on the closest enemy ship.

Hold the B button to accumulate energy, then release it to fire a powerful shot that can pass through objects.

These air mines explode at timed intervals, or when touched by an enemy ship or enemy fire.

As mentioned earlier, the XA-1 is also accompanied by two satellite ships that act on their own but stay with the ship; they're exactly like the options from Gradius. As the XA-1 levels up the player can gain the ability to change their formation and their power increases. 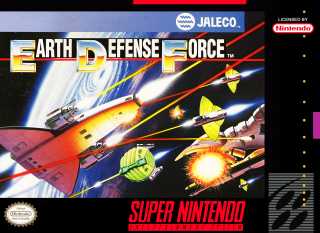