Known as the first stealth-action game, Metal Gear tells the tale of Solid Snake, a rookie operative of the U.S. special forces unit FOXHOUND, as he infiltrates Outer Heaven, a fortified military compound, to destroy a mysterious superweapon known as "Metal Gear".

Set in 1995 South Africa, players control a rookie operative (codenamed "Solid Snake") in an elite United States special forces unit called FOXHOUND, as he infiltrates a fortified militaristic compound (known as Outer Heaven) to both rescue top agent "Gray Fox" and destroy a new, mysterious superweapon known as Metal Gear. He must use a variety of weapons (such as a silenced pistol, a grenade launcher, and C4 explosives) and gadgets (such as binoculars, thermal goggles, and a cardboard box disguise) to progress through the compound, rescuing members of the nearby resistance along the way. Throughout the game, Snake can gain assistance with his portable transceiver, in which he communicates with his commander (Big Boss) and key members of the resistance.

While the original game was never released in North America, the game was later ported to to the Nintendo Entertainment System (which was released worldwide in 1987-1988). This port includes an updated level design, including a brand new outdoor prologue segment. It was also ported to PC MS-DOS computers and the Commodore 64 in 1990, and to mobile phones in 2004 (2008 in North America).

An updated version of the original game (alongside the official sequel, Metal Gear 2: Solid Snake) was included as a bonus in Metal Gear Solid 3: Subsistence for the PlayStation 2 (with a re-translated English script, a new difficulty setting, and an unlockable Boss Survival). This version was also included in the Metal Gear Solid 3 part of Metal Gear Solid HD Collection for the Xbox 360 and PlayStation 3.
In 2021 an Amiga version which is based on the decompiled MSX version has been released due to fan efforts and is freely available.

Metal Gear is considered to be one of the very first stealth games, and the gameplay reflects that. The game was played from a top down perspective where the player had direct control over Snake. The emphasis of the game was on moving through the environment without being detected by the enemies rather than focusing on combat. This is reflected in the weapons that Snake uses, which tend to be silenced, and are used to clear obstacles such as hollow walls or electrified floors. The only time that the player is forced to fight enemies is if they are spotted, or in order to defeat the game's bosses.

The player can also pick up and interact with objects in the levels. This comes in the form of obtaining ammunition or rations from defeated enemies, and colored key cards used to open locked doors. The game also has a level system, where if Snake rescues hostages, he gains a rank, which increases his maximum health, and carry capacity. For every 5 hostages the play rescues, they gain a rank, but they will lose a level if they allow a hostage to die.

Metal Gear is also known for pioneering the concept of an ' Alert Mode'. When the player is spotted, the game switches to Alert Mode, where the player must try to escape or kill those that have seen them. If the player is seen and a single ! appears above the enemies head, then the game enters into a level 1 alert. In this mode, the player can escape the alert by simply moving to a different screen, or by killing the enemies in that screen. However if the player is spotted and two !! appear over an enemies head, then the game enters into a level 2 alert and not only will enemies in the screen attack the player, but off screen reinforcements will attack as well. In this mode, simply moving to an adjacent screen will not suffice; they can only end the alert by killing all incoming enemies, or by leaving the building they are in and going outside, or by moving up or down a floor in the building.

Specific Differences (in the NES version from the MSX)

Set in 1995, Metal Gear takes place after the event of Metal Gear Solid 3: Snake Eater, Portable Ops, and Peace Walker, and before the events of Metal Gear 2: Solid Snake. The player controls a rookie soldier codenamed "Solid Snake", the newest FOXHOUND Member. Snake's mission is to infiltrate Outer Heaven, and militaristic state founded by a " legendary mercenary". The objective is to sneak in and destroy Metal Gear, a new and mysterious weapon of mass destruction being constructed deep within Outer Heaven.

In response to this threat, FOXHOUND sends one of their top agents Gray Fox to infiltrate Outer Haven and assess the situation, and deal with the threat posed by Metal Gear. However, after a few days, contact with him was lost, and the last message he sent was a mysterious transmission that simply read: "METAL GEAR...". The leader of FOXHOUND, Big Boss, sends in Solid Snake to rescue Gray Fox, and complete Gray Fox's original objective, "Operation: Intrude N313"

When Snake arrives in Outer Heaven, he meets local resistance members Kyle Schneider, Diane, and Jennifer, who agree to help him on his mission. Solid Snake begins his mission, and with his skills, and only using equipment procured on his mission, he manages to rescue Gray Fox. Upon rescuing him, Snake learns that Metal Gear is the codename for a walking bipedal tank armed with nuclear weapons. Outer Heaven plans to use this mobile nuclear platform to dominate the world, and install itself as the new world superpower.

In order to learn how to stop Metal Gear, Snake seeks out and rescues Dr. Drago Pettrovich, the lead engineer of Metal Gear, as well as his daughter Ellen. Dr. Pettrovich informs Snake how to destroy Metal Gear. Armed with this knowledge Snake sneaks and fights his way through Outer Heaven to get to Metal Gear. However, Snake begins to notice that the enemy is able to track his movements with uncanny precision, and he wonders how he is being tracked so accurately.

Never the less, Snake is able to make his way to the core of the base where Metal Gear is housed, and is able to neutralize it before it is completed. Having completed his mission, Snake begins his escape from the complex, however on his way out he is confronted by Big Boss who reveals himself to be the "legendary mercenary" and leader of Outer Heaven. He explains to Snake that he used his position as leader of FOXHOUND to steal military intelligence and build up his own mercenary forces, which are culminated as Outer Heaven, and the Metal Gear program. He had expected Snake to fail in his mission, since he was still just a rookie, and when he did not, he began to inform his soldiers of Snake's position, which explained why Snake was being tracked so precisely. Big Boss then starts a self-destruct sequence for the compound, stating that he won't die alone, and that Solid Snake will come with him. After a desperate battle, Snake manages to defeat Big Boss and make his escape of the compound; fleeing the base as it explodes behind him. However, after the credits of the gameplay, a message from Big Boss is displayed, saying that he will meet Snake again. 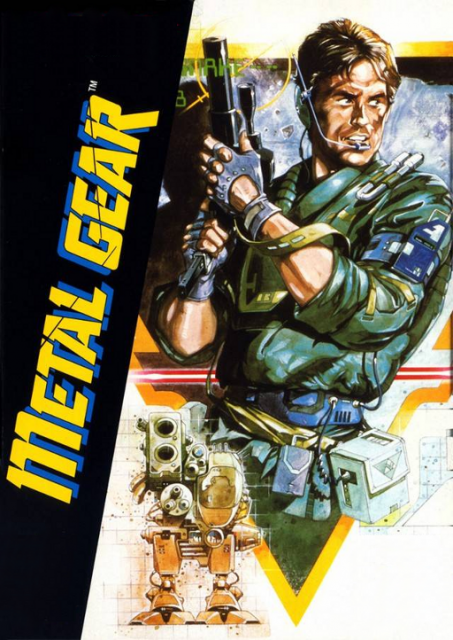