A strategy board game in the same style as Risk.
Xbox 360 Games Store

WARR: Global Domination is a strategy board game developed and published by Abico for the Xbox 360 as a part of Xbox Live Indie Games.

In WARR: Global Domination the goal of the game is to take over the entire map. There are multiple continents made up of smaller territories that can be captured.

Players gain more troops to be placed at the beginning of each turn. The amount of troops is dependent on the number of territories held. If a player holds an entire continent they will receive a bonus number of troops depending on how large the continent is.

Players can attack from any held territory with at least 2 units to any adjacent territory. Wins are determined by dice rolls. 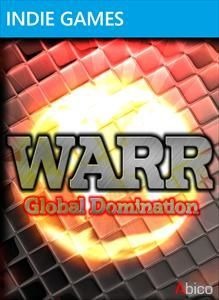