Humans prepare to defend themselves from aliens known as "The Bane" in Tabula Rasa, an MMORPG from NCsoft that contains shooting aspects in its combat system.

Earth captured the attention of the Bane (Bane is the term used to describe all of the forces fighting under the Neph army and includes the Thrax and many other races and genetically engineered creatures that fight for the Neph) after humans began broadcasting radio waves, building large cities, testing nuclear devices, and launching spacecraft into the cosmos. Once the Bane forces became aware of Earth, they invaded the planet to acquire its resources, both natural and biological, just as they had done so many times before on other worlds. Their method was precise and swift, and in a mere 5 days, the Earth was completely over run, and humans became firmly entrenched in a celestial war that had already lasted for centuries.

But the Eloh ( a peaceful and friendly alien race) who had visited Earth many years before, had not forgotten the fledgling races they had visited. They left knowledge and technology behind that allowed a select group of humans, chosen for their ability to learn and use the power of Logos, to escape. These refugees escaped to a handful of alien worlds where they could then be trained to fight the Bane. On these worlds we found allies, other sentient creatures fighting for their survival against the ruthless Bane. And so, the Army of the Allied Free Sentients was born.

The combat mixes in some aspects from shooters to add some real time action elements to the game. It still is not an outright shooter and features sticky targeting and has dice rolling based on character stats underneath. Stickiness can be adjusted to fit the preference of the player. Some weapons like the shotgun don't use the sticky targeting. Real-time factors like weapon type, ammo type, stance, cover, and movement are taken into account. The enemies are reported to have AI that will try to take advantage of the terrain, their numbers, and will try to flank the players. All this mix of system based combat and realtime movement and physics system creates a gameplay which encourages the player to think tactically; i.e. to take cover behind a pillar to get some time to reload the weapon while the enemies are getting into position again.

Critical hits, which happen on random "dice-rolls" cause special effects to happen, such as bleeding when hit by Physical damage. These effects are mentioned in the damage types section below. Also, when enemies are killed on a critical hit, they will stand up, shaking violently and unable to do anything with a red skull icon over their head. If the character who initiated this runs up to the enemy in time (approximately 5 seconds) and uses their melee attack, a special death animation is played depending on the damage type they killed them with, and they get an experience bonus.

The class system is different than typical MMORPGs, which have you choose a class at the time of character creation. Instead, Tabula Rasa's class selection is done via a tree, with each tier choice being made at levels 5, 15, and 30. To avoid any issues that might come of finding out you've made the wrong choice, you character can be "cloned," creating a new character with the same class specializations you currently have. Cloning is typically done every time one is about to select their next tier, so that the clone can become the class not selected by the original character.

A character may use any of the skills of his own class and root classes - a Sniper can invest in Ranger, Soldier, and Recruit skills as well. Each skill level is called a "pump" and most skills have 5 available pumps, although Signature skills (Fourth Tier special skills) only have one pump.

Tabula Rasa's weapons consist of a number of futuristic firearms, with a number of different types of damage output. Series 2 and 3 weapons are typically better or act differently than their standard counterparts and require more training in their area to use, and have slowly been introduced in patches.

All weapons except the Series 2 and 3 variants come in all damage types, each with their own temporary special effect on critical damage. The damage types are as follows:

Different types of armor have different strengths and weaknesses as well as special effects. Only certain classes can wear certain types of armor. Armor works on top of HP, once AP is worked through, then HP is damaged. (Originally armor had different damage "bleed-through" rates, but this has been eliminated and Armor is now an extension of HP). Different armors recharge at different rates; higher recharge is better for frontline fighting.

Logos abilities are similar to magic; they are based on the Logos elements which the Eloh imbued some of the human race with the ability to sense in ancient times. Logos elements are randomly found in the different worlds in which Tabula Rasa exists, typically hidden in caves and other nooks and crannies. Some Logos shrines have doors blocking them that require a number of other elements to be retrieved first; typically these are elements phrases, such as the Vortex door, which requires the elements Eloh, Empower, Only, The, and Strong. There are a great number of elements, many of which currently have no use other than to be collected. However a good number of them are required to train Logos abilities.

Logos abilities are spread throughout the class tree, but even if a character is trained in a certain class, the abilities are only available to him after having found the proper logos. Typically the element names refer to the effects or requirements of an ability. An example would be the ability "Fire Support," which requires the character to have found the logos Communication, Area, and Damage.

Tabula Rasa was set to be shut down February 28, 2009. Servers were slated to be free to play until January 10, 2009. However devs changed this date, to three weeks earlier, to allow for more free to play time. 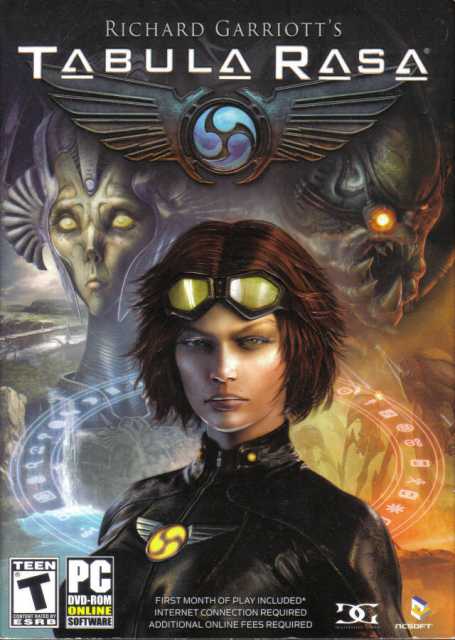