Metal Slug is a 2D run-and-gun platformer for the Neo Geo that's known for its fluid animation, sense of humor, and brutal two-player action.

Metal Slug (also known as Metal Slug: Super Vehicle - 001) is an arcade run-and-gun action platformer developed and released by Nazca (released by SNK in Japan) for the Neo Geo on May 24, 1996. Known for its fluid animation and sense of humor, Metal Slug would eventually spawn a franchise, as well as ports for the Neo Geo CD, Saturn (only in Japan on April 4, 1997), and PlayStation (only in Japan on August 7, 1997).

The game is set in the year 2026, during an ongoing war between the armies of the modern world (known as the Regular Army) and the powerful Rebellion (led by the ruthless General Morden). When the Rebellion captured a group of new, advanced all-terrain combat vehicles (known as SV-001, or "Metal Slug"), players take control of Marco Rossi or Tarma Roving, elite soldiers of the Peregrine Falcon Squad, to locate the vehicles... as well as Morden's powerbase.

The player can select either Marco Rossi or Tarma Roving as their character, and is paradropped into the start of each level armed with a pistol, grenades, and a set of melee moves. These moves are knifing and kicking attacks that trigger automatically when the player presses the fire button within close range of an enemy. Power-ups with limited ammunition, including heavy machine guns, flamethrowers, and rocket launchers can be picked up for additional firepower. At certain points the player can also jump into tanks, which provide an even greater capability for destruction and a limited amount of added protection. Metal Slug's gameplay is a run-and-gun style that is similar to Contra. The player is pitted against a massive slew of constantly spawning and attacking enemies. The objective is for the player to blast their way through each level, freeing prisoners and collecting items on the way. In addition to the normal grunt enemies, there are also boss battles which require the player to empty large amounts of ammo into the bosses before they fall.

Advanced tanks, named " Super Vehicle-001," are encountered in each of Metal Slug's levels. They serve not only as additional firepower, but also provide added protection against the normal one-hit death health vulnerability. If hit by enemy fire while within a Slug Vehicle, power-ups shaped like gas cans can be collected by the player to restore their tank's health meter. In keeping with the game's cartoonish humor, the player may also still jump and duck while piloting the Slug Vehicle to avoid attacks. 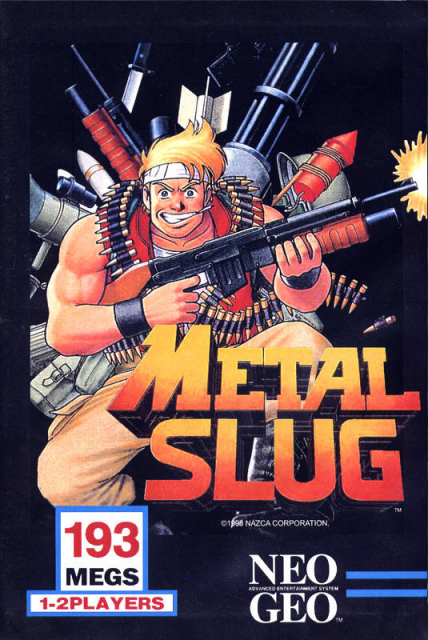