Battlfield 2142: Northern Strike, released on March 8th 2007, is the first and only expansion pack released for Battlefield 2142. It featured three new maps, two new vehicles, eleven new awards and ten new unlocks. In Northern Strike the battles have moved into Northern and Central Europe in 2145, three years after the war began and soldiers are battling in colder enviroments.

Three new maps were released in Battlefield 2142: Northern Strike which were the only available maps using the 'Assault Lines' gamemode and they are the only maps that spawn the two new vehicles, they are Bridge at Remagen, Port Bavaria and Liberation of Leipzig.

Playable in Titan and Assault Lines modes. The EU, the attacking side, must take over all of the PAC's, the defending side, control points until they can finally capture the final control point. In total there are 8 control points that the EU needs to capture.

Playable in Titan and Assault Lines modes. The EU, the attacking side, must boost themselves onto the huge strip of land that hosts the PAC's titan base and then make their way through the control point until they can finally capture the last point, in total there are 6 control points the EU needs to capture.

This is the only Northern Strike map that is only available in Assault Line mode, and not Titan mode. The EU, the attacking side must make their way through an area of Leipzig and capture the PAC's 6 control points.

Two new vehicles were introduced in Battlefield 2142: Northern Strike, they were the high speed Hachimoto and the powerful Goliath.

The Hachimoto is a very high speed hover vehicle with a turret placed on the top which can rotate 360°. It can transport two people, one person driving and one person using the turret. It's high speed is caused by the light armor placed on the vehicle meaning it can only withstand a low amount of damage so the Hachimoto is best used for quick, unexpected attacks on the enemies. Both of the players inside the Hachimoto are exposed to enemy fire and can easily be shot down by assault rifles, especially the gunner. There are usually 2-3 spawn points for a Hachimoto on each Northern Strike map.

The Goliath is the most powerful vehicle in Battlefield 2142 and can only be used by the team that it is spawned for. It can hold five people and players can spawn inside it at any time if there is a space available in the Goliath. Each person in the vehicle has control over a different type of gun which are great against soldiers but useless against vehicles. There are six regenerative cells, two on the left side, two on the right side and two on the back; these cells repair the Goliath automatically and can be destroyed, once destroyed the Goliath repairs slower and eventually doesn't repair itself at all. The Goliath is a deadly vehicle, especially once its in the center of the battle however its also possibly the slowest of the vehicles.

There was also ten new unlocks introduced, two unlocks or each kit, one squad leader unlock and one player ability unlock. These unlocks are only available to players who own Battlefield 2142: Northern Strike. 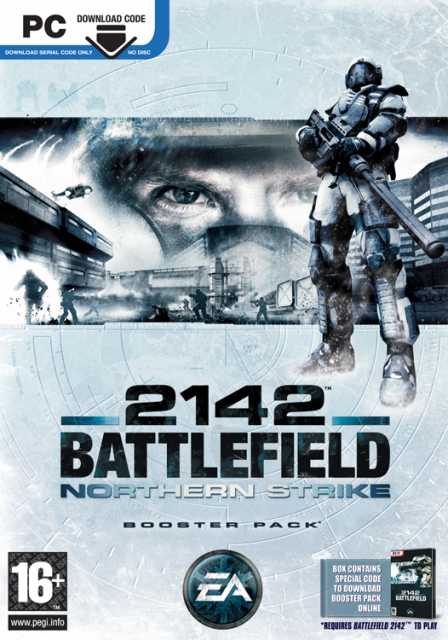