A top-down multiplayer, browser-based shooter with 3D graphics. Was made by Yendis.

The other differences include the addition of armor pickups and ammo pickups, which replace infinite ammo in Vertix.io. Armor pickups are often placed on small islands surrounded by instantly lethal lava, thus requiring decent platforming skills to access, which is another difference from Vertix.io Lastly, the game uses internal Kredit to purchase cosmetic items, while Vertix randomly awarded them at the end of the match. Its cosmetics are also currently limited to skin camos, whereas Vertix also featured Hats and Shirts, along with an extensive list of Sprays.

Karnage.io has 6 classes: Machine Gun-equipped Triggerman, a Hunter with a Sniper Rifle, Vince with a Shotgun, Franklin with a Revolver, Minigun-wielding Spray N Pray and Mr Ops with a rapid-firing Nade Launcher. Hunter and Mr Ops use pistols as their sidearms: the rest of the classes use grenade launchers instead, which have much less ammo and rate of fire than Nade Launcher, but are slightly stronger. All of these classes were adapted from Vertix.io, though four more of Vertix's classes were judged unbalanced under the new gameplay mechanics. 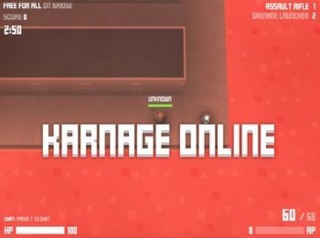