A handheld side-scrolling platformer that serves as the standalone sequel of the 2002 handheld game based on the "Lilo & Stitch" feature film and the game tie-in for its franchise's first TV series, Hämsterviel Havoc follows the eponymous duo as they stop the plans of the evil Dr. Hämsterviel.
Game Boy Advance

A sequel to the 2002 handheld tie-in Disney's Lilo & Stitch, Hämsterviel Havoc also ties in with the animated series Lilo & Stitch: The Series. Along with the standard platforming segments, it also features bonus segments (including a Mode 7-inspired driving segment). Along with human girl Lilo and genetic experiment Stitch, players also recruit other experiments to help them (including Slushy, Richter, and Sparky). 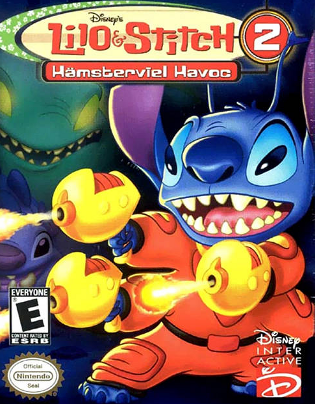