Originally planned as the last game in the R-Type series of shoot-'em-ups, Final has a lone ship investigating a crashed space colony to research a failed counter-attack against the Bydo Empire. It features 101 different ships to choose from, each with a unique combination of weaponry.
PlayStation 2

The story takes place 20 years after the events of the original R-Type, as players investigate the remnants of a large counter-attack against the Bydo Empire (known as Operation: Last Dance). After uncovering the mysteries of the Bydo origins, players are tasked with finishing off where Operation: Last Dance left off, with multiple paths and endings.

In addition, the game features a bonus tactical PVP mode (known as Vs. AI Mode), where two players configure the AI of their chosen ship (controlling different aspects and strategies, such as their spacing and item proficiency) and have them fight each other to the death.

It was intended to be the final mainline game in the series until its 2021 revival with R-Type Final 2.

As a standard affair of side scrolling shooters, players controls a single space craft destroying enemies along the way whilst dodging enemy fire hoping to defeat the stage's boss before moving onward to the next stage. Certain enemies also drop power-ups which increases fire power or aids the player in some way. However, the series is also well known for it's unique game play mechanics; Wave Cannons, Bits and arguably the most iconic, Forces. Players also have the ability to manually control the crafts speed from 1 - 3 through the L2 and R2 buttons.

The one defining characteristics that has made the series different from other side scrolling shooters is the Force. The Force is a separate entity from the ship that can drastically change a ship's firing mode in two different ways. By attaching the Force to the ship, the ship fires it's more powerful projectiles depending on which power-up is collected. Ejecting the force from the ship allows it to fire standard projectiles (albeit many). Another mechanic of the Force is that is damages and enemies it's in contact with as well as absorbing small enemy projectiles giving it a defensive ability. When enough projectiles are absorbed or damage though enemy contact has been made when the Force Metre hits 100.0%, players can unleash a special attack that damages all enemies on screen.

There are three Crystals that can be picked up that configures the firing pattern of an attached force. Red Crystals gives an Air-to-Air attacks that fire directly in front of the ship. Blue Crystals have a wide firing arc whilst Yellow Crystals gives Anti-Surface capabilities. Furthermore, special ships have the ability to manually control firing rate or pattern through movement or adjusting the speed depending on the Force currently being used.

Another powerful weapon in the player's arsenal is the ability to charge their gun into massive shot (known as a Wave Cannon) that is capable of obliterating even the toughest of bosses. The Wave Cannon varies from Stage 1 to 7. The higher the number the more powerful it is but would require a longer charge. The pattern and strength is dependant the on ship selected and not the Force

Players can also collect two Bits which essentially act as mini-Forces that constantly hover above and below the craft. Like Forces, the block small enemy projectiles and can damage them upon contact. Should the player have a Red Crystal equipped, it also fires small projectiles of it's own. They cannot be directly controlled unless the player is piloting a ship of the OF series in which the firing direction can be altered dependent on the ship's movement. Another available power-up is the Missiles which constantly fire alongside the main gun. The Missiles can vary from ship to ship.

R-Type Final also contains a mini game, VS AI, whereupon players configure an AI for their selected and pits it against another AI controlled ship. The winner is whoever manages to destroy the opposing ship at least two times out of three matches. They're are three leagues available.

As this was considered the last major installment in the series, Final contains a Museum that showcases just about every piece of lore and equipment in the entire series. The Museum is laid out in the style of a Tech-Tree as each ship has a special requirement for unlocking them such as using the "X" Ship for "Y" Minutes whilst going through Stage 6-3. The date upon the ship was released is determined by the PS2's internal clock. So a ship unlocked in 2009 will have a release date of 2169, 160 years ahead.

The Museum holds 101 unique ships. Each individual craft can be examined and it's development history, weapon statistics and more can be viewed freely. Other franchises developed by Irem can also be found, such as Mr. Heli, Gallop (aka Cosmic Cop) and Image Fight. With such extensive information, Final can be considered a database, bible and swansong for the franchise.

Other unlockable content includes artwork, music and an information database pertaining every Bydo enemy in Final. The amount of information available is dependent on how much research the player has gained (which can be achieved on the number of the times the enemy has been fought as well as using certain ships and bits.)

The Japanese and Korean versions had "Proud of You" sung by Shiina Hekiru in the ending credits whilst US the release featured the Blue Man Group's "Piano Smasher". The European release had a different song altogether. 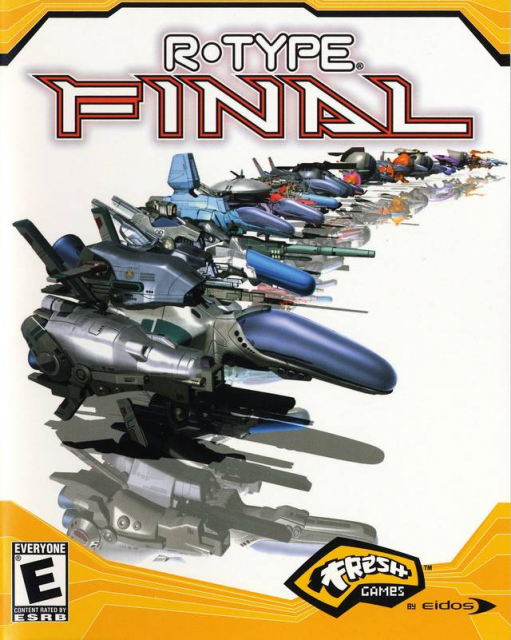