The third installment of the Gradius series, pitting the Vic Viper against Bacterian forces yet again. It introduces the "Edit Mode" system, allowing players to fully-customize their weapon loadout.

Gradius III (known in Japan as Gradius III: Densetsu kara Shinwa e, the sub-title loosely translated to "From Legend to Myth") is a sci-fi side-scrolling shoot-'em-up developed and released by Konami for arcades exclusively in Japan on December 1989.

The third entry in the Gradius series (and the sequel to Gradius II: GOFER no Yazou), Gradius III puts players back in control of the starfighter Vic Viper as a new Bacterian force is making their way to the planet Gradius.

The game retains most of the gameplay from the first two games, with some new additions and changes. Along with a variety of new power-ups, the most notable addition to the game is the ability to freely-customize the Power Meter. In addition, some versions of the game also include an alternate mode for beginners (reducing the game to three levels while making the game easier). The game also includes a behind-the-back scalar-3D segment used for one level.

The game received only one port in that era (for the Super Nintendo Entertainment System), released in both Japan (on December 21, 1990) and North America (on August 13, 1991). It features numerous changes in stage layouts, optional difficulty selections, new power-up choices, and the option to continue. This version was later digitally re-released for the Wii (as a Virtual Console title) in 2007 (April in North America, September in both Japan and Europe).

The game was also bundled with Gradius IV: Fukkatsu as part of the Gradius III and IV compilation for the PlayStation 2 in 2000 (April in Japan, November in both North America and Europe). This version of the game includes some adjustments, as well as some new features (including the Japanese-exclusive online leaderboards and an unlockable "Extra Edit Mode" with additional power-ups to choose from). It was also included in the 2006 PlayStation Portable compilation Gradius Collection.

The game is infamous as being one of the hardest of the series, as the original arcade version had no way to continue the game upon losing all lives, and a continue system wasn't even in place to be used at the discretion of the owner and operator. The biggest addition is the ability for the player to edit their weapon load-out, that will come with power ups collected through the game. Players can choose predetermined setups or opt to customize their own, though certain variations of weapons are not available between modes.

The Power Meter system from the previous games returns, in which players start each life with minimal speed and a basic cannon shot, and can upgrade their ship by collecting Power Capsules to progress through their seven-part Power Meter (and then using the Power-Up button to collect the meter's highlighted power-up). One new power-up is added to the series, called the Extra (marked with the "!" symbol).

It also includes the Power Meter Select system from Gradius II (as Weapon Type Select), in which players can choose from four different weapon configurations (changing the Missile, Double, and Laser power-ups). Instead of the classic Type-A configuration, players can optionally choose:

In the SNES version, both Spread Bomb and 2-Way Missile are reversed, and Free-Way is replaced by the new Back Double.

After choosing from the four Weapon Types players can choose from three different barrier types (Force Field, Shield, and Free Shield). Free Shield is not selectable in the SNES version. The Speed-Up, Option and Extra power-ups are the same for all four Types.

New to the series is the optional Edit Mode, which allows players to customize their own Weapon Type by choosing a variety of options for each Power-Up:

In the SNES version, this is changed to:

The Speed-Up power-up is the same, no matter the configuration.

Increases the movement speed of the Vic Viper. This can be activated up to five times to further increase the speed, although higher levels can be very unwieldy.

This is the only power-up that is standard in all configurations.

Allows the Vic Viper to deploy missiles separately from its main weapon.

Improves the Vic Viper's cannon by having it shoot an additional shot. Replaces the Laser power-up. Two different types are available in this game:

Replaces the Vic Viper's cannon with a more-powerful laser cannon. Replaces the Double power-up. Two different types are available in this game:

Same as the original, the Option creates a ball of energy that follows behind the path of the Vic Viper and fires the same weapons (and missiles, if active) as the ship. This can be activated up to four times, each of which creating a new energy ball.

Recurring enemies, called "Option Hunters", can appear sometime after an Option is active. While it cannot damage the Vic Viper, it instead attempts to steal all of the ship's Options. Players are given time to dodge its attack to minimize the amount of Options stolen.

Provides a temporary barrier to the Vic Viper that completely negate projectiles in certain directions. These barriers have limited energy and can be destroyed.

This Power-Up is marked with the "?" symbol in the Power Meter.

New to the series. Provides a unique bonus to the Vic Viper used only for certain situations.

This Power-Up is marked with the "!" symbol in the Power Meter.

A soundtrack containing original music and arranged tracks was released by Konami on the Kings Records label on February 21, 1990. This music has been included on other Gradius themed albums, all released by Konami. 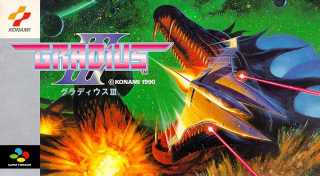