Heavily inspired by the disc combat scenes in the 1982 film Tron, Ricochet has players battle against one another using throwing discs in abstract arenas comprised of floating platforms.

Ricochet is a multiplayer-focused sci-fi first-person action game developed and released by Valve for the PC on November 1, 2000 (as a free mod for Half-Life). It was later made a standalone downloadable retail product with the release of Valve's Steam storefront (on September 12, 2003).

Heavily inspired by the disc combat scenes in the 1982 movie Tron, Ricochet puts players in an arena filled with floating platforms as they must toss discs as one another in an attempt to either knock them off into the mysterious void below. Along with jump pads that allow players to navigate the arena, the game includes special powerups and abilities to help them. Unlike other first-person combat games at the time, players can only attack straight ahead at chest height (which makes it easier to use the ricochet barriers for skill shots).

The original version was also included in all pre-Steam updates for Half-Life since its June 11, 2012 patch (1.1.1.0). While the Steam version was sold separately from Half-Life, it was an included bonus when locking a CD-key of a GoldSrc game to a single Steam account. The Steam version received support for Mac and Linux platforms on July 31, 2013.

Players navigate between each floating platform using special jump pads located at edges of each platform. Arenas also include bounce pads and teleporters, both for navigating to different platforms, and special barriers that allow discs to ricochet back into the arena.

Players have three discs in reserve, all of which regenerate over time. Along with the standard throw, players can use all three discs to throw a Decapitator disc that instantly kills an enemy.

There are four power-ups that temporarily improve the disc attacks in the game: 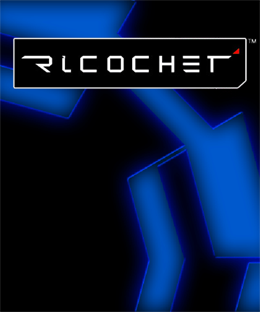