The eighth iteration in the series brings the party to the Nintendo Wii. Mario Party 8 is one of the best-selling Wii games, selling over 4.86 million units worldwide.

Mario Party 8's original release date in Europe was June 22, 2007, but Nintendo delayed the game until July 13, 2007. However, upon its release, complications arose when one of the characters in the game used the word "spastic," which is very offensive for people with disabilities. Nintendo immediately recalled the game and replaced it with the word "erratic," and then officially released the game on August 3, 2007.

The plot of the game involves a ringmaster named MC Ballyhoo inviting Mario and his friends to the Star Carnival, where the rest of the game takes place.

The gameplay of Mario Party 8 is largely similar to previous installments in the franchise, with obvious differences taking advantage of the Wii's unique capabilities. In the single player mode, one player competes against three computer controlled opponents across the several boards offered. The goal of the game is to collect as many stars as possible, through a variety of ways (buying them, winning them, stealing them, etc). In the case of a tie, the person with the most coins will win.

Multiplayer mode is what Mario Party is really known for, however. In multiplayer, up to four players can compete on one of the several boards offered (less than four people means that there have to be computer controlled opponents in addition to the human players). There are other modes as well. Party Tent is where the players can have a variety of different battles with various amounts of players. Star Battle Arena is essentially the single player story. Minigame Tent allows players to merely play the minigames offered, instead of going to a particular board. In the Extras Zone, players can access minigames not shown in the other modes. Fun Bazaar is where the player can purchase new minigames and other extras.

All of the playable characters from Mario Party 7 return in Mario Party 8. They are Mario, Luigi, Peach, Yoshi, Wario, Daisy, Waluigi, Toad, Boo, Toadette, Birdo, and Dry Bones. Three new characters make appearances, however. Blooper and Hammer Bro are the two characters available from the Mario franchise, but the third is the ability to use one's Mii to play (which is only available in the Extras Zone).

Minigames are the series' staple of the Mario Party franchise. Naturally, many take advantage of the Wii Remote's motion capabilities. This is taken advantage of in a variety of ways, from rowing a boat to a shooting gallery. There are minigames that also use the buttons, but the main usage usually involves some sort of motion.

One new feature introduced in Mario Party 8 is the ability to transform using candy power ups. These can be obtained from a Candy Shop, or the candy spaces on the board (which only appear on some boards). Candy effects range from allowing the player to roll the dice more than once, to allowing characters to "attack" other characters as they are moving on the board. 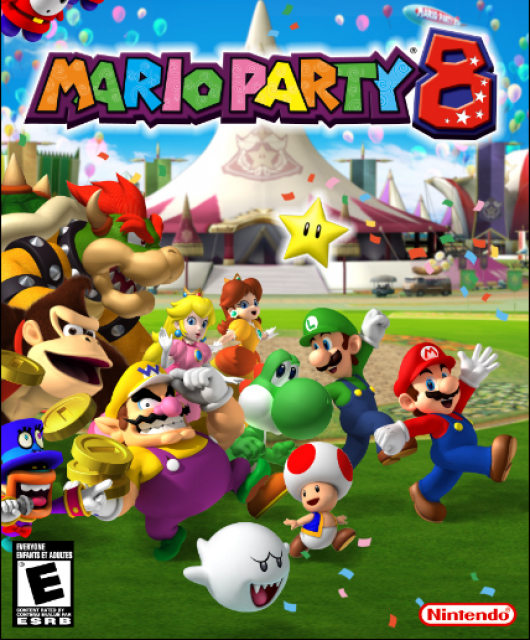