In 1987 a small and struggling video game company called Square put all their remaining resources entirely into the hands of the Director of Planning and Development named Hironobu Sakaguchi. They earnestly hoped that whatever game he made would be a hit. As Hironobu was convinced this would be his last game ever, he called it Final Fantasy.

Final Fantasy is a single player role-playing game (RPG) which lets the player control four characters called the "Light Warriors." They begin by rescuing a princess from the Notorious Knight Garland. Soon after, they are given the world spanning task of collecting four Orbs of Light and defeating four fiends. The fiends went by the names of Lich, Kary, Kraken, and Tiamat. They had taken the Orbs from the rightful place they belonged and spread corruption over all the lands, skies, and seas. After many battles the Light warriors had collected items, gold and experience. When all the fiends were defeated, it was revealed that they took Garland’s corpse and sent it back in time. He had now become a mass of living evil known as Chaos. Confusingly Chaos sent the four fiends into the future where they currently plagued the world. Only when Chaos was defeated in the past and the four fiends were defeated in the present, was the world's natural balance finally restored.

Final Fantasy was originally considered overbearingly difficult. Saves only came at resting in a Town’s Inn or using an expensive item known as a House. Spells in the late game cost more than half a million gil, and had a limited number of charges that could only be replenished by resting. Monster encounters could go from simplistic to overpowering at a moment’s notice.

Attacks were played out in turn based combat. All characters and monsters all were told what to do before the round began, be it cast a spell, use an item, or commit a basic attack, and all actions were then played out from the fastest person on the battlefield to the slowest. In the original game, some attacks could be useless. For example, if a Fighter and a Thief were both instructed to attack a goblin they would both do so. If the Thief killed him, it wouldn't stop the fighter from doing exactly as he was told by swinging his sword at the space the goblin once stood instead of at the other enemies present. This was later altered in the re-releases for the PSOne, Game Boy Advance, PSP, and iPhone versions, so the attacker would automatically attack the next available target.

The player chose their party of four with some combination of Black Mage, White Mage, Red Mage, Thief, Fighter, and Black Belt characters. These classes could be upgraded by the Dragon King, to; White Wizard, Black Wizard, Red Wizard, Ninja, Knight, and Master. Players traveled the world in vehicles, such as; boats, airships, and canoes. In combat, up to 9 monsters of various types could battle the player's party. Unless they soared through the skies in an airship or strolled in a safe area like a town, 'random encounters' were always possible. In these Encounters, a band of monsters could emerge and strike the party. Mages had a limited amount of spells they could learn.

Final Fantasy had almost 20 musical tracks. Some of which, like the tune played after 'Victorious battle' and the 'Opening Theme', remained in one form or another in Final Fantasy games for decades to come.

The music for Final Fantasy was composed by Nobuo Uematsu. Some of the tracks became the trademarks to the Final Fantasy series: like the "Prelude", played on the title screen, and the "Victory Fanfare", which is played after every victorious battle.

The PSOne release of Final Fantasy was under the title of Final Fantasy Origins and contained enhanced remakes of both Final Fantasy I and II using higher quality MIDI and cleaner 16-bit graphics. These enhanced remakes were initially ports of the Wonderswan re-releases that never made it to the US for various reasons, most notably because the Wonderswan Color was never released in the US. Aside from the obvious graphical face-lift, various changes exist in the PSOne version that differ from the original NES version. An easy mode was created for the original Final Fantasy (increased Gil and EXP curves), auto-re-targeting, a temporary quicksave, and the addition of new items such as Phoenix Downs (revive a fallen ally) and Gold Needles (remove petrification).

Using the same enhanced graphical look of the PSOne release, the Gameboy Advance release of Final Fantasy, known as Dawn of Souls, was most notable for drastically reducing the difficulty. The version also included bonus dungeons for each game, though the complex battle transitions and music quality were reduced due to the technical limitations of the system. All changes to the battle system of the PSOne release carry over, however the magic system (previously levels of magic "slots" with limited number of uses) was changed to use Magic Points instead. Speculative reasons for the changes include Nintendo's fear that an overly difficult RPG would turn away the younger player-base, arguably a larger portion of the overall audience than on the PSOne.

The PSP re-release featured the same difficulty reduction and added bonus dungeons of the Gameboy Advance re-release, but featured an even bigger graphical overhaul, with various post-processing effects added such as cloud overcast and hi-res sprites (including spells). However, unlike Origins and Dawn of Souls, these two versions were not sold together and retailed individually at release for $29.99 USD each. Together, these two releases doubled the price of the initial release of both Final Fantasy Origins and Dawn of Souls ($29.99). The price, in addition to the numerous other re-releases of the games on other platforms, resulted in the game receiving much criticism from the gaming press.

On February 25, 2010, Square-Enix released an updated version of this game onto the iPhone and iPod Touch. Retailing for $8.99, it is essentially a port of the PSP version of the game. The graphics are higher resolution than the Dawn of Souls remake, and are essentially on-par with the sprites seen in the PSP version. In addition, the Soul of Chaos, Labyrinth of Time, and the 4 special element-based dungeons are also included (which are unlocked after defeating one of the four Elemental Masters). The game immediately rocketed up to the #2 spot on the Top Grossing Apps list.

The game has a specialized control scheme for the touch screen. The overworld has a simple D-pad overlay, and the battles are equipped with some large buttons and a simple tapping interface to select what action to perform and which enemy to perform it on. This is a highly efficient method for playing the game, but whereas in other games the player could just hold a button down to skip past the battles, it requires continued taps in this version, which can actually slow down the game. It currently sits around 4.5 stars on iTunes. 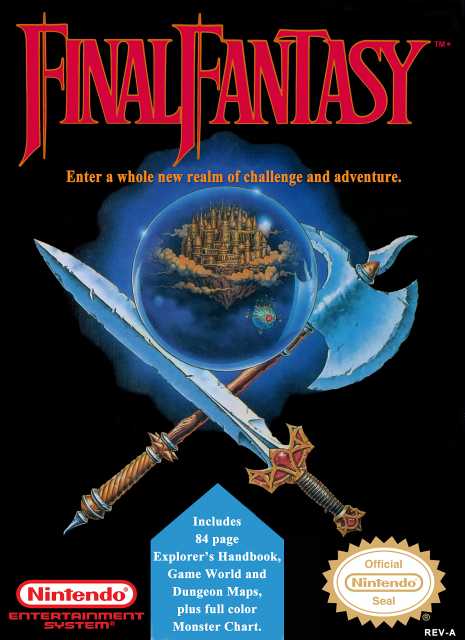