Guild Wars: Factions is the second game in the Guild Wars series. The game introduces the continent of Cantha,two new professions: the Assassin and the Ritualist, and expands on the PvP and PvE gameplay.

Guild Wars: Factions, often referred to simply as Factions, is the second campaign and first expansion pack in the Guild Wars franchise. Unlike most expansion packs however, Factions functions as a standalone game, and does not require the original to play it. For information on core Guild Wars gameplay and character classes, go here.

On the last day of the Harvest Festival, Shiro Tagachi, Imperial Bodyguard of the Emperor, assassinated the Emperor at the scared Harvest Temple.  Soon later, the bells of war began to sound and the armies of the factions of Cantha, the Kurzicks and the Luxons stormed the temple and defeated Shiro. However, before passing away, Shiro used all of his ill-gotten power to drain the Emperor's soul away.  Shiro's death wail became "the Jade Wind" - a cataclysmic wave of energy that turned trees, animals, people, and open water into stone and crystal.

Now, after two centuries later, Shiro has returned to Cantha with a new threat - a monstrous plague that will infect any human and turn them into a monster of Shiro's army.  The once-allied factions of Kurzick and Luxon are at constant war.  That is where your journey begins.  To stop the plague from spreading, to ally and unify the armies of Kuzick and Luxon and to stop Shiro from taking over Cantha.

While the original Guild Wars introduced the Guild system according to which players could organize, Factions brought with it the Alliance system, a kind of guild for guilds. With this new system, every guild has the ability to found an alliance, which allows them to invite up to 9 other guilds into a loose association. Every player of every guild in an alliance can converse with their peers in alliance chat, which functions similarly to guild chat, except for its broader scope. Players can also freely travel amongst all of the guild halls in that alliance just as they would travel to their own. This means that their fellow guilds do not have to pay the small fees associated with giving guest passes for their allies to play with them, and also allows the entire alliance to freely make use of the NPCs available to their peers. Finally, depending on whether the alliance is associated with the Luxons or the Kurzicks, players can donate the proper type of faction points so as to further the entire alliance's standing with that group. The alliances with the most faction points for their respective group are then given control over increasingly large cities in Cantha.

In terms of sheer numbers, Alliance Battles represent the largest form of PvP in all of Guild Wars. Teams of 12 players aligned with either the Luxons or the Kurzicks face off to push the Kurzick-Luxon border forward for the group they represent. Players join this competition by forming groups of 4 players, three of which are selected for each side in a random fashion. To win a battle and thus advance the border, the two sides race each other to 500 points. Killing a player of the opposing alignment gives 1 point, but so does holding a single Shrine for several seconds. Since the latter method clearly leads to a faster accumulation of points, this means that gameplay largely revolves around capping and holding the 7 Shrines found on each map. Victory is also instantly awarded if one side holds all 7 Shrines for one consecutive minute, though this is obviously a much more difficult and rarer way to win. Once one side wins an overwhelming amount of games against the other, the border is advanced and the map changes. Maps found deeper in Kurzick or Luxon territory grant inherent bonuses to the losing side, leading the border to move back and forth in a "seesaw" style. Both winning and losing players are awarded quantities of Luxon or Kurzick faction, depending on which side they fight with. This faction can be redeemed by players for PvE skills, teleportation scrolls which grant access to advanced PvE dungeons, or Amber/Jadeite which is used for armor crafting. Regardless of which the player chooses, the amount of faction redeemed is also counted towards the player's Luxon or Kurzick title, as well as his alliance's faction total, which, if high enough, grants that alliance control over a Canthan city. Players can also choose to simply donate their faction to their alliance without any personal benefit, and this is rewarded by giving that player 2x the amount of faction towards their title and their alliance's total.


In addition to the six core classes, Guild Wars: Factions players also have access to two entirely new ones.

The Assassin is a dagger-wielding, energy-based melee class. While it is less armored than the Warrior, its attack chains can deliver a devastating amount of spike damage in a short amount of time. The Assassin, despite its name has a very low DPS (damage per second). Daggers are for the most part ineffective against a Warrior's heavy armor, and a spellcaster will usually be to hex or spike the assassin before the Assassin can kill them with its daggers. The brunt of an Assassin's effectiveness comes from its attack skills. The Assassin's attack skills are unique in that they are categorized as Lead Attack, Off-hand Attack and Dual Attack. Most Assassin attack chains follow that order, as most Off-hand Attacks require a Lead Attack, and most Dual Attacks require an Off-hand Attack. When attack skills are linked in a chain, they cause massive bonus damage, ignore armor, and give conditions extremely quickly, thus making Assassins one of the primary spikers in the game.

The Ritualist expands on the Ranger ability to cast spirits while also offering significant healing capabilities second only to the Monk. While not considered a primarily offensive class, the Ritualist also has the ability to deal significant amounts of damage. Its spirits can heavily disrupt the enemy's team's efforts by knocking them down, blocking them and blinding them, while healing your own teammates in the area. In addition, Ritualists also have access to Item spells, which replaces the Ritualist's weapon with an item that imparts bonuses both when held and when dropped to the ground. The Ritualist is more of a support class, as it can rarely win a game or survive on its own. However, it is usually an invaluable addition to any team.

The music from Guild Wars Factions was composed by Jeremy Soule. 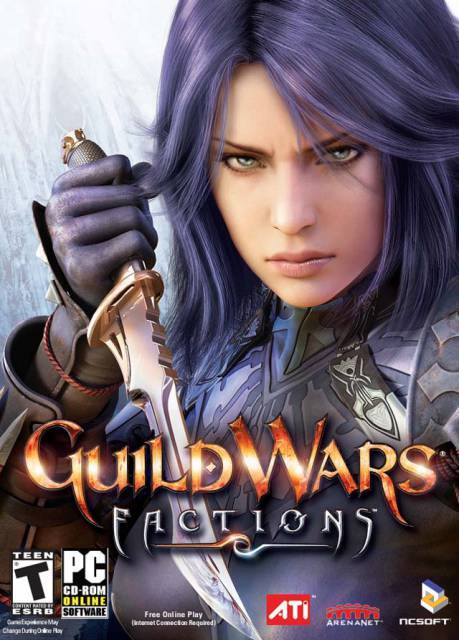