Metal Slug Advance plays almost identical to every entry in the Metal Slug series. It's a side-scrolling, arcade style 2D action game with a heavy emphasis on non-stop action. Players quite literally run through levels, shooting everything in sight. Power-ups can be attained usually through rescuing captive soldiers or killing some enemies.

Players have the choice to play as either Walter Ryan or Tyra Elson, a blue-haired male and female redhead respectively, and the story involves a Peregrine training camp on an island that is invaded by General Morden. Walter and Tyra are new recruits, thrust into an actual mission.

The protagonist, either Walter or Tyra, has a pistol with infinite ammo as a default weapon. There are various weapon pickups to be found such as Rocket Launchers, Heavy Machine Guns, Shotguns, and a few other surprises. Grenades can also be thrown. There is also some vehicle gameplay to be had as characters step into various Metal Slugs, The Slug Gunner and The Slug Flyer.

The two new systems introduced in Metal Slug Advance are the life system, which is simply a health bar that replaces the lives from the previous game, and the e-card system, which provides bonuses if the player finds special cards scattered throughout the stages. 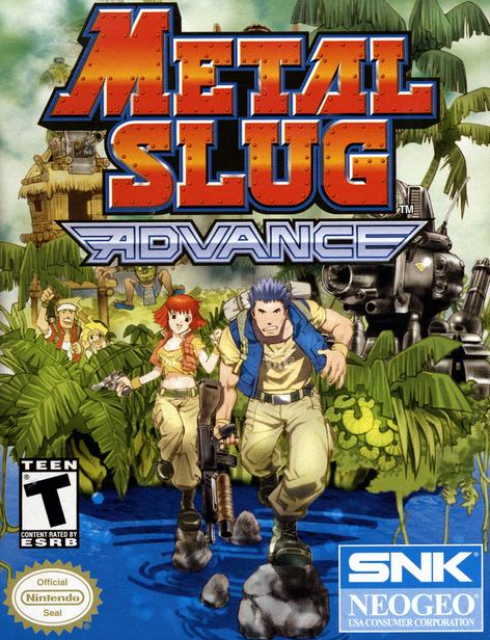