Kurogane Hiroshi no Yosou Daisuki! Kachiuma Densetsu ("I Love Hiroshi Kurogane's Predictions! Legend of the Winning Horse") is a horseracing simulation game for the Nintendo Famicom that focuses mostly on correctly predicting the outcome of horse racing based on as much data as the player is able to input, the idea being to use this knowledge when gambling on the real thing. While horseracing is a component, the player has no active role in its outcome: instead, the player's interaction with the game is entirely through menus and set-up.

The publisher, Nihon Bussan (also known as Nichibutsu), brought in mangaka Hiroshi Kurogane (known for Shinsengumi, among others) for the endorsement as he was famous for his love of betting on horse races. 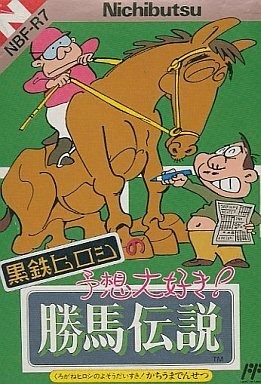