The Longest Journey puts the player in the shoes of 18-year old April Ryan as you face various challenges to find the Guardian and restore Balance between the two distinctly different worlds of Stark and Arcadia.

The year is 2209, and April Ryan is a young art student living out on her own for the first time. She's desperately poor, scratching out a meager paycheck at a trendy coffee shop to cover the rent and devoting all her free time to earning her scholarship, but she loves it anyhow; she's already made a couple great friends and has bright plans for the future.

Lately, however, she's been troubled by strange and incredibly vivid dreams of a foreign land inhabited by strange creatures and a howling black vortex that threatens to devour her just as she jolts herself awake. April tries to dismiss these visions as simple nightmares and keeps them to herself. Nevertheless, a cryptic stranger named Cortez seems to know all about them, and when the supernatural beings from her dreams start manifesting themselves to other people in April's life, she decides to seek out whatever help he has to offer. Cortez reveals that these apparitions are not hallucinations but real beings from a parallel dimension which are starting to leak through the barrier between the two worlds. He also informs April that it's her destiny to uncover the cause and gently coaxes her into stepping through a shift to enter the alternate realm.

On the other side, April is greeted by Vestrum Tobias Grensret, a sort of priest who helps preserve knowledge of the twin dimensions and the delicate Balance which maintains the Divide between them. His world is called Arcadia, a world inhabited by many intelligent non-human races and where physical laws are frequently broken by feats of magic and alchemy. April's world of science and logic is known as Stark, and Vestrum Tobias explains to her the legend of how a single unified Earth came to be split into two separate dimensions. Unfortunately that Divide is breaking down, allowing elements from one world to begin polluting the other, and only a born cross-dimensional shifter like April can save both worlds by restoring the Balance between them.

April's quest leads her on a winding journey through both the technologically advanced Stark and the fantastical world of Arcadia, meeting a variety of distinctive characters and uncovering a lot about their lives and cultures along the way. Sadly, April also discovers that her path is also leading away from the life of school and friends she was just starting to build for herself, and struggles with the realization that she has to sacrifice so everyone she cares about can survive.

There are dozens of hours worth of dialogue in the game, and not just from the other characters. April Ryan offers an oral description for virtually every noteworthy object in the game, from reading notes aloud to making an observation about a nondescript bystander on the edge of a scene. This offers players a lot of feedback about the environment which can be very useful in solving the game's many puzzles and helps make April feel like a distinct character in her own right rather than just an extension of the player.

This is further aided by the way the entire first chapter is practically devoted to exploring her life. Where many games serve up heroes whose sole purpose in life is to embark on great adventures, The Longest Journey quickly establishes the sense that April is an optimistic young woman with her own life and that she wasn't really looking to have it all turned upside down by some special destiny. The same holds true for many of the major characters: they might be standing still on screen, but there's so much personality inherent in their dialogue that they create the illusion of leading full and interesting lives.

The Longest Journey includes an unlockable feature called "The Book of Secrets" which includes concept art from the development of the game, unused music, and bloopers from the voice recording sessions. This material becomes available to anyone who completes the game, but can be revealed earlier to players to take the "organic plastic leaf" from the plant outside April's bedroom and place it in the flower bed outside Abnaxus' tree. Players who unlock the features early should be forewarned that some of these pictures and audio clips contain spoilers of events late in the game.

During the game there are many references to popular culture of 20th century. Some of these are listed here:

The Longest Journey has an original soundtrack with two different versions: an online version (192kbps mp3s) and a CD version. The online version contains 36 songs. The CD version has only 30 tracks, but one of those tracks is not available through the website. The track order varies, but is mostly the same.

The first 32 tracks are composed by Bjørn Arve Lagim, and the last 4 by Tor Linløkken for the jukebox in The Fringe Café. 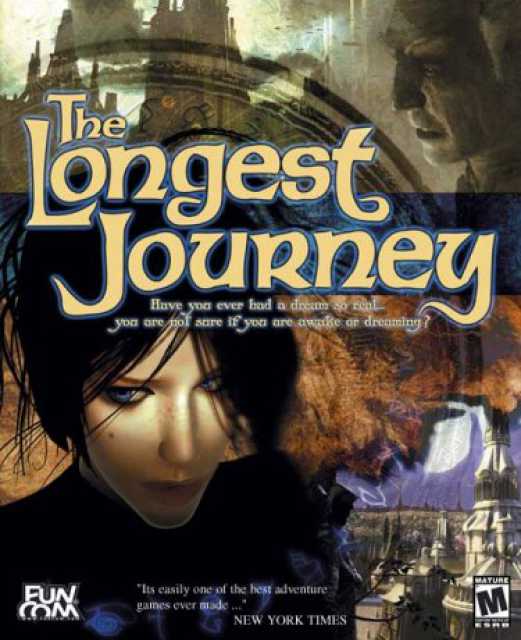