On his 21st birthday, Jackie Estacado gets possessed by an entity known as The Darkness. After getting into trouble with the Mafia, Jackie finds himself on the run, trying to protect the people most important to him.
Xbox 360 PlayStation 3

The Darkness is a First-Person Shooter by Swedish developers Starbreeze Studios and published by 2K Games. Originally a comic book series penned by Marc Silvestri of Top Cow, The Darkness follows Jackie Estacado, a twenty-one-year-old soldier in the Mafia, as his life changes when he is possessed by a dark entity known only as The Darkness. The day takes place in contemporary New York City, while some sequences feature in supernatural worlds. While standard weaponry is available, the player is encouraged to harness the Darkness and to feed the evil consuming Estacado.

The game opens with Jackie Estacado on his twenty- first birthday as he is on the run from the police in New York City. Estacado escapes and learns that he is wanted dead by powerful men inside the Mafia, namely his Uncle Paulie. Estacado makes his way to his girlfriend Jenny's apartment, where she wishes him a happy birthday. At midnight, Jackie is consumed by a strange power which appears to be conscious. The power refers to itself only as The Darkness. As Jackie tries to find out who wants him dead and why they want him dead, he finds himself being hounded from all angles, not only by the mob, but also by a corrupt Captain in the police, Eddie Shrote.

Paulie and Shrote kidnap Jenny and hold her hostage to try and get at Jackie. Estacado eventually finds them, but is held back by The Darkness "for his own good". He finds himself powerless as the two men execute his girlfriend. Distraught by what he sees, Estacado turns a gun on himself and commits suicide, "the first time he died". The Darkness rescues Estacado from the jaws of death and places him in purgatory, a hell filled with World War One soldiers that are unable to die, while his body recovers. In this purgatory Jackie comes across one of his ancestors, Anthony Estacado. His great-grandfather admits to Jackie that it was he that brought the Darkness into the family ancestry; it was he that doomed every subsequent male born under the Estacado gene to be consumed by The Darkness on their twenty-first birthday. Anthony gives Jackie information relating to how to be rid of the evil entity. There is a castle in purgatory that houses the very core of The Darkness. As Jackie approaches the stronghold, he is revived and drawn back into the 'real' world.

The only thing left to do is to avenge Jenny's death. Estacado decides that he must kill Shrote, but he fails to find Shrote at his apartment, leaving instead with several pieces of incriminating evidence. Over the phone, Jackie informs Shrote that he has the evidence. The two men arrange a meeting, where Jackie hands over the evidence in a briefcase which he rigged with explosives. The detonation kills both men, permanently destroying Shrote, but once again sending Jackie back into purgatory.

In hell, Jackie reunites with his grandfather, and the two enter the castle together. Anthony dies and is put to rest eternally. Jackie confronts the entity, where out of rage and the need to continue avenging Jenny by destroying Paulie he accepts the Darkness. It tells him that each time he kills a man it will consume him even more.

Despite these warnings, Jackie sets out on a mission to kill Uncle Paulie for good. He lays siege on a drug shipment destined for Paulie's hands, and Paulie escapes to a lighthouse on a nearby island. Jackie gives chase. He finally reaches Paulie. Killing Paulie would mean ultimate consumption by the Darkness, but unable to keep hold of his emotions, Jackie executes Paulie. He is totally consumed by the Darkness. In the final scenes of the game, Jackie enters in a dream-like state, similar to what death might be like. He is lying in Jenny's arms, and she explains that they only have a few minutes together. The game ends with Jackie "waking up."

Strictly speaking, The Darkness is a very traditional early twenty-first century first-person shooter. The player can wield a variety of weapons. No shortage of shotguns, assault rifles, and sub-machine guns are made available to Estacado as he seeks to defend himself against an onslaught of Mafia soldiers. Handguns and sub-machine guns are the only weapons which can be dual wielded (the left and right bumpers control each hand), and of all the weapons, handguns have the most depth - a semi-automatic pistol can be combined with a six-shot revolver, for instance. Instead of reloading firearms, Estacado simply drops them and replaces them with a similar weapon he picked up. Enemies display a standard level of resistance to fire from weapons. The player automatically regenerates health. There are no health or armor pickups throughout the game.

While the game makes a myriad of weapons available to the player, the Darkness powers are encouraged much more readily, and they are a whole mechanic unto themselves.

The Darkness is the most powerful weapon available to the player, but using it has one caveat: the player cannot be near light. The majority of the light sources (lamps, street lights, et cetera) in the game can be destroyed. When in the dark, the Darkness automatically regenerates. If too much light is present, the Darkness drops significantly in strength, eventually ceasing altogether. Key to the Darkness are the hearts of the men which Jackie kills. The more hearts that are devoured, the more powerful the Darkness becomes.

Special "Darkness Powers" are unlocked as the player progresses through the game at crucial stages in the plot.

A subset of the Darkness powers are Darklings. They are small demonic beasts which have their own consciousness. They follow Jackie around and help him eliminate enemies or clear obstructions. Darklings can only be summoned when there is absolute darkness. They take damage when they are struck by enemies or when they enter the light.

The Darkness takes place in an accurate representation of New York City, with real place names and areas. Players travel between boroughs via the subway, which essentially acts as a loading screen between maps. In the subway players can take on side quests from NPCs. The side quests are entirely optional.

The game also features several full feature films that the player can watch on TV sets throughout the game, including To Kill a Mockingbird.

The Darkness requires 6.8GB of space to install on an Xbox 360 HDD.

Original music for The Darkness was written by Gustaf Grefberg, the in-house composer at Starbreeze. Other than the credits theme, which is by Mike Patton's Tomahawk project, it is the only music actually playing during the game. The unrelated licensed soundtrack includes:

Mike Patton lends his voice to the game, voicing The Darkness. 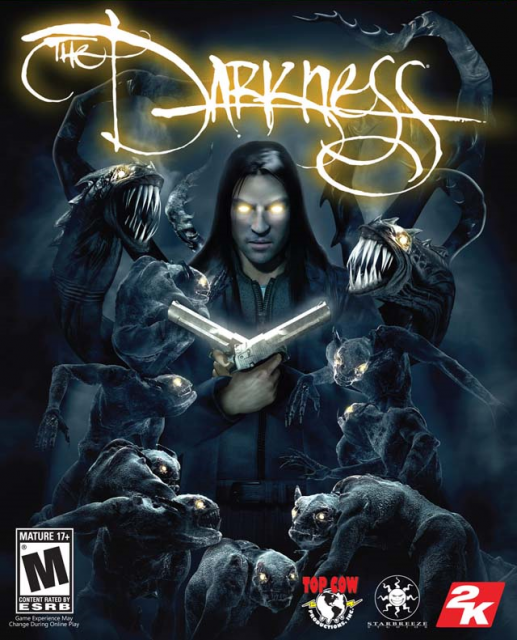