Mega Man X (known in Japan as Rockman X) is a side-scrolling action platformer developed and published by Capcom for the Super Famicom in December 1993 and on the US Super Nintendo Entertainment System on January 1994.

The spiritual successor to the classic Mega Man platformers (for the Nintendo Entertainment System), Mega Man X reinvents the series by introducing players to a faster, more technologically adept hero (Mega Man X, known simply as "X") set in a brand new (and darker) storyline (which is further expanded by numerous sequels).

Set in the year 21XX, a century after the adventures of the original Mega Man, players control Mega Man X, a highly-advanced android (with the unprecedented ability to think as a human) developed by Dr. Light and incubated in a large capsule for a 100-year diagnostic program (to help X understand sanity and morality). He is found by roboticist Dr. Cain, who uses Dr. Light's design notes to replicate X into a new generation of androids (known as "Reploids"). When certain Reploids mysteriously became a threat towards humanity (becoming known as "Mavericks"), the government creates an elite Reploid police force (known as "Maverick Hunters") led by Dr. Cain's latest design, Sigma. However, Sigma (along with the majority of the Maverick Hunters) defects and becomes a Maverick, and it's up to X (who feels guilty for being the prototype behind the Mavericks) and Zero (the new combat-savvy leader of the Maverick Hunters) to infiltrate and destroy Sigma's forces (including eight Mavericks and the mercenary Maverick Vile).

X has a variety of new abilities (not used by the original Mega Man), including the ability to cling onto walls (slowing his descent while allowing him to walljump), quickly switch to a new weapon (without having to pause the game), use a mechanized combat vehicle (the "Ride Armor"), and find unique upgrades to his armor (boosting his vitality and attack capabilities while giving him the ability to perform a fast dash, rather than the original's slide, and supercharge his X-Buster). Despite these additions, the game uses the same progression, as players guide the hero through each themed level (in any order), led by a boss that grants a new weapon when defeated (and is weak by a specific other weapon), before infiltrating the major antagonist's fortress.

Mega Man X later received a port to the PC (in 1995), Wii (via Wii Virtual Console on April 18, 2011), all iOS devices (on December 21, 2011), and Wii U (via Wii U Virtual Console on May 30, 2013). It was included in the Mega Man X Collection compilation for PlayStation 2 and GameCube on January 10, 2006. It also received a complete remake in 2005 for the PlayStation Portable (as Mega Man: Maverick Hunter X). The remake features new 2.5D graphics, animated full-motion video, voice acting (with a new script), a rearranged soundtrack, and new gameplay mechanics (including game saving, restructured levels, and difficulty settings).

Throughout the game, X can find rare large blue Light Capsules which show him a holographic message from his creator, Dr. Light. Depending on which Capsule X finds, Dr. Light briefs him on what the upgrade does before allowing him to step into the Capsule to receive it (giving him a shiny new replacement piece for his armor).

Along with the four Capsules above, the game includes a very hidden fifth Capsule which grants X a powerful ability.

If he manages to reach a certain point in Armored Armadillo's stage after receiving all four armor parts and obtaining every Sub Tank and Life Up powerups, and then doing a exact process (by collecting a specific hard-to-reach Life Energy pellet while restarting at any point of the level three times in a row), he can reach a Capsule in which Dr. Light (sporting a Karate Gi) grants X the power to perform a Hadouken (made famous by Ryu and Ken of Capcom's Street Fighter series).

By inputting a specific combination (down, then down and forward, then forward, then the Attack button) while X is on the ground and has a full Life Energy gauge, X throws a small (but deadly) fireball that can eliminate most bosses in one or two hits.

In the PC version, the exact process is replaced by reaching the Life Energy pellet with full Life and Weapon Energy.

Based on the armadillo, Armored Armadillo (known as Armor Armarge in the Japanese version) takes control of a mine. Heavily armored, he fights by quickly shooting laser balls and by curling up into a ball and bouncing off the room. His weakness is the Electric Spark.

Based on the stag beetle ("kuwagata" in Japanese), Boomer Kuwanger (known as Boomerang Kuwanger in the Japanese version) makes himself comfortable in the top of a large tower. Very agile, he attacks by throwing his headpiece like a boomerang (in similar vein to Cut Man from the original Mega Man), by dashing across the room (sometimes so fast that it resembles teleportation), and by grabbing X with his headpiece and flinging him up to the ceiling. His weakness is the Homing Torpedo.

Based on the penguin, Chill Penguin (known as Icy Penguigo in the Japanese version) is located in a base built into a snowy mountain. A small fighter who fights over an icy floor, he attacks by diving across the slippery floor, spitting balls of ice, and creating sculptures of ice with his breath (which he hurls at X by pulling a switch on the ceiling that activates a blizzard). His weakness is the Fire Wave.

Based on the mammoth, Flame Mammoth (known as Burnin' Noumander in the Japanese version) takes control of a factory. A large figure who fights on a conveyor belt, he attacks by spitting flaming balls of oil and by jumping towards X (stunning X if he happens to be on the conveyor when Flame lands). His weakness is Storm Tornado, though successful use of the Boomerang Cutter limits his ability to spit oil.

Based on the octopus, Launch Octopus (known as Launch Octopuld in the Japanese version) controls a subterranean base underneath an ocean. Preferring to fight underwater, he attacks by firing a series of small torpedoes and by twirling around to form a whirlpool (pulling X towards him). His weakness is the Rolling Shield, though successful use of the Boomerang Cutter limits his ability to form a whirlpool.

Based on the mandrill, Spark Mandrill (known as Spark Mandriller in the Japanese version) takes control of a power plant. He is a hulking fighter who attacks with his fists, by swinging on the ceiling onto X, and by pounding on the ground (causing sparks to travel away from him and rise up walls). His weakness is the Shotgun Ice.

Based on the chameleon, Sting Chameleon (known as Sting Chameleao in the Japanese version) hides in a robotic forest. He can blend into his surroundings (making him harder for X to detect) and attacks X by either latching onto the ceiling with his tongue and swinging around (causing spikes to fall) or by grabbing onto the wall and firing three spikes simultaneously (by swinging his tail). His weakness is the Boomerang Cutter.

Eliminating him grants X the Chameleon Sting, which allows him to fire a large energy ball that splits into three laser beams. When the Chameleon Sting is charged, X's armor color changes rapidly, granting him temporary invulnerability (at the cost of only being able to fire the uncharged Chameleon Sting).

Based on the eagle, Storm Eagle (known as Storm Eagleed in the Japanese version) commands a large airship that is docked at an airport. He can fly into the air and attacks by either spitting an egg at X (causing it to split into four little birds that head towards him), diving through the air at X, or by flapping his wings so fast that it starts pushing X back (and because they fight on the airship as it's flying, it can cause X to fall off the edge). His weakness is the Chameleon Sting.

In 2005, Capcom released a 5-disc box set called Capcom Music Generation Rockman X1~6. It contains the original music of Mega Man X through Mega Man X6 as well as some unused tracks. Mega Man X tracks cover half of the first disc and the tracks are listed as followed: 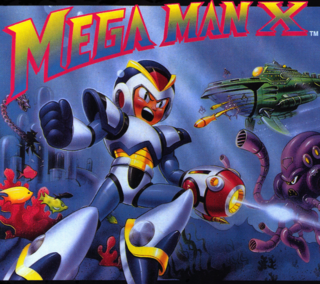