NBA Street Vol. 2 is the second game in the NBA Street series. It continues the over-the-top ridiculous style of the first one while adding a few new aspects to the game play.
PlayStation 2

This is the second installment in the NBA Street series. It was released on the Xbox, Gamecube, and PlayStation 2. It was developed by EA Sports Big and published by EA. Like the other games in this series, it is a cartoonish take on street basketball.

The object of the game is to score points, just like in real basketball. The majority of games go to 21, with the winner having to win by at least 2 points. Unlike most real street basketball the full-court is usually used for play. Players have a limited turbo meter that allows them to perform tricks, trick counters, dunks, and trick blocks. The more stylish you are the more trick points you accumulate. If a player accumulates enough trick points they can activate a gamebreaker. A gamebreaker is a special shot that is worth the same as a normal shot, but takes away a point from your opponent.

The exhibition mode in the game. Players can play the computer or up to 4 can battle it out at once. Up to 4 Profiles can be loaded at once as well, allowing you to keep track of overall wins and losses.

A tour style mode. You pick a region such as the Northwest to play in. You must beat NBA teams in that region to unlock the final game, a game against the legends of that Region.

The "story" mode of a game. You create a character and attempt to conquer the courts with him/her. You start out with low stats and a weak team, but as you play and win you have the opportunity to add better players to your teams and increase your skill points. Winning games and tournaments unlocks new courts to play on. Throughout the "Be A Legend " mode you play against many NBA players and a different Street legends.

An interactive tutorial showing you how to use the game's controls.

Vol. 2 added new gameplay mechanics to the series, with the most significant addition being the introduction of level 2 Gamebreakers. In the first game, the player could only achieve a level 1 Gamebreakers, while Vol. 2 introduced the ability to "pocket" your first Gamebreaker, thus allowing you to rack up enough points to receive a level 2 version. The level 2 Gamebreaker, which was also unblockable, gave the team 2 points and takes away 3 to 4 points from the opponent, depending on where the shot is from.

The other big addition was the ability to play as NBA Legends such as Bill Russell, Wilt Chamberlain, and various versions of Michael Jordan. 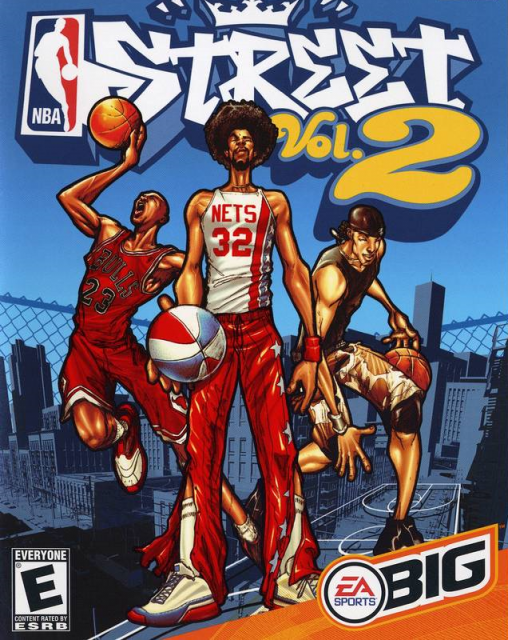