The sequel to one of the most acclaimed PC games of all time, Deus Ex: Invisible War throws you into a divided world, where multiple factions wish to take advantage of your cybernetic abilities. Playing as Alex D., you make your own path through corrupt leaders and worldwide conspiracies.

Deus Ex: Invisible War starts twenty years after the original Deus Ex. You are placed in a world that is recovering from a catastrophic event called the Collapse. The story starts just after a terrorist attack that destroys the city of Chicago. You take the role of Alex D., who is a trainee at the Tarsus Academy. As you progress through the story Alex learns that there are conspiratorial groups who seek to change the world dramatically. Also, as you play, certain events can be influenced by your actions.

Like the prequel, Invisible War is a first-person game. The game combines elements from a range of genres including stealth and shooter. Deus Ex: Invisible War emphasizes player choice, depending on your gender some of the quests and dialogues are varied, the developers designed the game in this way so the player has a choice in a situation. An example of this is when you have to somehow commandeer an airship, you have three choices: you can bribe the guard with money, attack him, or try to sneak past him. Alex D. can be equipped with microscopic implants called bio-mods, which grant special abilities such as invisibility or increased strength. Alex D. has 5 slots where you can hold the bio-mods. Every bio-mod can be upgraded twice, enhancing their effects.

The gameplay dynamics have suffered vastly compared to the original. In addition to pooled ammo (all guns use the same ammunition), there are more fetch quests and diplomatic options than the previous game. While you never form an actual alliance with any organization, you can choose which groups you want to assist.

The game cannot decide whether it wants to keep the dystopian feel of the original Deus Ex with levels consisting of bright, colourful scenery contrasted with hints in the story of a suffering world at the brink of social and economic collapse.

The soundtrack was composed by Alexander Brandon and Todd Simmons 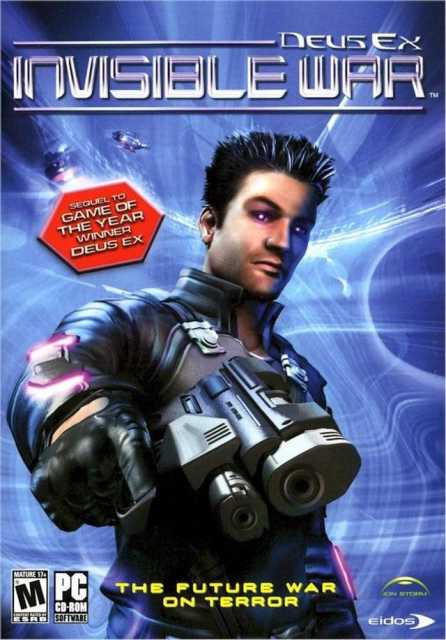