Sonic the Hedgehog's sole adventure for the Sega CD, as he travels through time to save the fate of Little Planet from Dr. Robotnik's army of robots (including Sonic's new adversary: his metallic doppelganger).

Along with the traditional gameplay of early Sonic the Hedgehog games, Sonic CD features the concept of time travel, allowing Sonic to alter the course of a given level's history by traveling through time and making changes to the past. The game also includes redbook audio (with separate soundtracks for the Japan/PAL and North American releases), a Time Attack mode, and animated FMV introduction and ending movies produced by Toei Animation.

Sonic's adventure revolves around "Little Planet", a miniature planet which is believed to contain unique time shifting properties. After his nemesis, Dr. Robotnik, tethered the planet to a mountain over a giant lake and began conquering its past using its weak temporal boundaries, Sonic must traverse the planet and free it from Dr. Robotnik's control while rescuing his captured love interest, the pink hedgehog Amy Rose, from his robotic rival Metal Sonic.

Sonic CD was later ported to the PC (on computers using Windows 95) in 1996 (later re-released by Expert Software) and was included in the Sonic Gems Collection compilation for the PlayStation 2 (outside North America) and GameCube in 2005.

An enhanced port, developed by independent game developer Christian "Taxman" Whitehead, was released for the Xbox 360 (via Xbox Live Arcade on December 14, 2011), PlayStation 3 (via PlayStation Network on December 20, 2011), Android devices (on December 14, 2011), iOS devices (on December 15, 2011), PC (via Steam on January 19, 2012), Windows Phone devices (on November 9, 2012), and Ouya (on August 1, 2013). The game engine used for the port was re-developed from scratch, maintaining the original feel while adding widescreen display support, optional Spin Dash controls from Sonic the Hedgehog 2 (in which the player gains speed by tapping the jump button repeatedly), the option to choose between the Japanese/PAL and North American soundtracks, and the inclusion of Miles "Tails" Prower as a secret playable character.

The core gameplay of Sonic CD is very similar to other Sonic the Hedgehog games at the time. The premise is to traverse a series of obstacles and enemy robots (while collecting golden rings and power-ups) to reach each stage's goal. Unlike other platformers, Sonic's speed gives him the momentum to traverse through these environments at a fast pace, though most levels are built in a way to limit that to promote exploration, and even the time travel mechanic is often used as an obstacle to hinder the player.

The player moves Sonic left and right using the directional pad and jumps using any Jump button. Holding up on the d-pad lets Sonic look up (temporarily shifting the screen upwards) while holding down on the d-pad lets Sonic crouch (temporarily shifting the screen downwards if held down long enough) Crouching while moving causes him to curl up into a ball (known as the Super Spin Attack), reducing his friction against the ground while allowing him to destroy most enemies (whereas running into them will damage Sonic instead). Jumping also curls him up into a ball, allowing him to destroy most enemies whenever airborne. The Jump button can also be used in certain levels for interacting with objects (such as the pinball flippers in Collision Chaos Zone).

Sonic has two techniques that allow him to instantly gain momentum from a fixed position. The first, returning somewhat from Sonic the Hedgehog 2, is the Spin Dash (known in Sonic CD as the Super Spin Dash), which is performed by holding down on the d-pad and pressing the Jump button. After releasing the d-pad, Sonic moves forward (in a speed determined by how long the d-pad was held) while doing his Super Spin Attack. The second technique is the Super Peel-Out, which is performed by holding up on the d-pad and pressing the Jump button. The Super Peel-Out is the same as the Super Spin Dash, except that it propels Sonic faster at the cost of his Super Spin Attack (causing him to be vulnerable to enemies).

Hitting most enemies while not performing one of the Spin Attacks (or hitting certain enemies and hazards regardless) causes Sonic to do both of two things: Lose all of his possessed rings (but allow him to re-collect some of the rings that fell out of him this way) and stun him momentarily, or (if he does not have any rings in his possession) lose a life and begin again from a checkpoint. However, the player immediately loses a life every time he is crushed between moving objects, falls down the bottom of the level (which is rare in Sonic CD), drowned underwater (spending a lot of time underwater without touching large air bubbles), and spends more than ten minutes in the current life on the current stage. If Sonic loses all of his lives, it's Game Over. Sonic begins the game with three lives, and can earn lives by either collecting 1-Up power-ups, collecting 100 rings, or earning 50,000 points.

As a hidden easter egg, an instant Game Over can occur if the player leaves Sonic idle (and unpaused) for more than three minutes at one time (in which Sonic says "I'm outta here!" and leaps off the screen).

Sonic CD is the only game in the original series to include the concept of time travel as an in-game mechanic. By passing a signpost marked "PAST" or "FUTURE", Sonic would be charged with mysterious energy. The ''PAST'' or ''FUTURE'' symbol at this point appears on the bottom of the screen. While in possession of this signpost, if Sonic could maintain a high-level speed for several seconds (which is difficult to accomplish intentionally, as losing that momentum at any point for the last few seconds after attaining would cause Sonic to lose the energy and the sign), he would be whisked off to a different time era, featuring a permutated version of the same level. The level may include new obstacles, enemies, and puzzles. There are four permutations for each stage:

If Sonic crosses a goalpost with 50 rings held, the player can choose to play a special stage by letting Sonic jump into a giant golden ring close to the goalpost. Special stages are three-dimensional Mode 7 courses in which Sonic (shown in third-person perspective) must run around and collide with six flying UFOs (usually by jumping) in a limited amount of time while avoiding time-consuming obstacles.

Each of the six UFOs, when destroyed, grant Sonic either a group of coins (for scoring purposes) or a Power Sneaker powerup, allowing Sonic to run faster through the course for a short period of time. If the time dwindles down to 20 seconds, a blue UFO appears near the center of the course which, if destroyed, grants Sonic 30 extra seconds.

Each of the seven courses are filled with different terrain that either help or hinder Sonic's progress. Grass and rough patches of gravel, for example, slow down Sonic. Water not only slows Sonic down, but increases the rate at which the timer goes down (as well as take away 10 seconds on each landing on the water). Fans slowly propel Sonic upwards (allowing him to take out UFOs easier) while springs quickly propel Sonic upwards (allowing him to reach a farther distance quicker). Spiked pits cause Sonic to fall to the ground and lose some rings.

While the final game has seven stages, data from the PC version's CD-ROM disc reveals that there was an eighth stage in development (between Palmtree Panic and Collision Chaos). Clues regarding what this stage could have been is hidden in the game (from the "Little Planet" artwork on loading screens featuring a cactus-filled desert region, to a clip in the credits video featuring dilapidated ruins). The 2011 remake, developed by Christian "Taxman" Whitehead, was originally going to include a bonus level based on the concept (titled "Desert Dazzle") and a new final stage (titled "Final Frenzy", which was only accessible by collecting all seven Time Stones and allowed Sonic to travel through time without needing signposts), but both were redacted by Sega.

The main themes for the Japanese soundtrack, also used in the European version of the game, are "Cosmic Eternity - Believe in Yourself" by Naofumi Hataya and "Sonic - You Can Do Anything" by Masafumi Ogata. Both features lyrics by Casey Rankin and vocals by Keiko Utoku. The primer one is used at the game's introduction sequence and the latter one is used at the game's ending sequence. The 2011 enhanced port uses an instrumental version of these themes.

The main theme for the American soundtrack is "Sonic Boom" by Spencer Nilsen, featuring vocals by Pastiche. Used in the game's introduction, ending, and title sequences, the track would later be included in the soundtrack for Super Smash Bros. Brawl (as one of the themes for Sonic the Hedgehog's stage).

After the completion of Sonic the Hedgehog in 1991, Yuji Naka was not happy. His parent company, Sega of Japan, paid its employees based on their seniority - those who worked at the company longer got paid more than the new recruits, and in the grand scheme of things Naka was still considered fairly new, despite having been a key figure in launching one of Sega's biggest franchises. He quit his job at Sega of Japan - but not before being lured to Sega of America by Mark Cerny. Mark Cerny was part of the " Sega Technical Institute", a program/development team whose ultimate goal was to bring overseas developers in to impart their wisdom to the relatively inexperienced American designers. With Naka came a number of other key Sonic Team staff, and it was here at Sega Technical Institute that groundwork was laid for Sonic the Hedgehog 2 - a game that was to be much larger in scope than the original Sonic, with nearly three times as many levels, two playable characters, split-screen multiplayer, and a time travel mechanic.

Back on the other side of the globe, the original character designer for Sonic and Dr. Eggman, Naoto Ohshima, was offered the opportunity to make his own Sonic 2 at Sega of Japan for their up-and-coming hardware add-on, the Sega CD. Given that the majority of Sonic Team was in America working on Sonic 2, Ohshima had to assemble his own team out of Sega of Japan's roster of designers, lending the game a unique flavor separate from the Sega Genesis Sonic the Hedgehog games. Ohshima and his Japan team took the concept of time travel and ran with it, developing a gameplay mechanic around traveling back in to the past in order to alter the status of the future.

Whereas Sonic 2 introduced Tails, Sonic CD introduced Amy Rose and Metal Sonic, brought to life by Kazuyuki Hoshino; his first job in what would become a long lasting relationship with Sonic Team. Though the game originally started life as Sonic the Hedgehog 2 for the Sega CD, the two projects had diverged so dramatically in style and mechanics (especially after Sonic 2 saw cuts that nixed its time travel concept) that the game was eventually renamed simply "Sonic CD". The game was originally intended to launch shortly after the original Sonic the Hedgehog, but Sega felt it was more important to release Sonic the Hedgehog 2 first, delaying the fully-completed Sonic CD almost a full year beyond its originally intended launch date, instead using the game to fill the gap between Sonic 2 and Sonic 3. 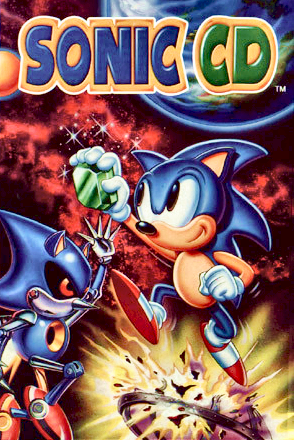