Just Cause 2 is a third-person action-adventure sandbox game developed by Avalanche Studios and published by Eidos Interactive and Square Enix. The player takes the role of Rico Rodriguez, an agent of the US government posing as a mercenary, as he takes jobs and tasks for the various rival factions on Panau, a fictitious island nation in Southeast Asia ruled by the dictator Pandak "Baby" Panay". Players can perform over-the-top stunts by combining the grappling hook, the parachute, and the "Stunt Position" system that allows you to mount different areas of the vehicles in the game.

The game was originally slated for release in late 2008; however, it was later announced in October of that year that the game would be pushed back to 2009. Since then, the game was delayed once again to its final release date of March 23, 2010.

Protagonist Rico Rodriguez, an Agency operative, is sent to Panau to find Rico's former commanding officer and friend, Tom Sheldon. Tom is accused of stealing top-secret intel and millions of dollars from the Agency. Recently taken over by Baby Panay, a ruthless dictator, Panau is a violent place.The island features three rival factions: The Ular Boys, The Reapers, and The Roaches. Rico must work with these factions to gain information through helping them in their individual struggles. By completing faction missions and causing "chaos", Rico uncovers information that leads to Sheldon being absolved from his crimes as the plot shifts to a suspicious international interest in the small nation of Panau. Eventually, it is discovered that the island features a great wealth of oil. In the final mission, Baby Panay launches nuclear missiles at the nations attempting to steal his country's oil stash. Rico defuses all but one of the missiles, rerouting it, along with Baby Panay, to destroy the oil and end international interest in Panau.

The game is set on a fictional island in Southeast Asia called Panau, situated in the Malay Archipelago. The island features varied terrain, including snowy mountains, deserts, jungles, cities, and beaches, all of which the player is free to traverse. The back of the box claims that the island is 400 sq miles (making it the second largest open world game with FUEL being the first) although this is debatable.

The developers of Just Cause 2 have left many easter eggs and special locations around the map, including:

Located at coordinates 24453X 917Y. Alright, try not to get too excited, at those coordinates is a island in the shape of a slice of pie.

The most well known easter egg in Just Cause 2 is the island in the top left corner of the map, which is an island that contains many references to the TV show Lost. Visiting the island will cause darkened skies and rain, and if the player is flying an airplane, it will burst into flames. On one section of the beach the word "search" can be seen spelled out in the ground with wooden planks, as well as a crashed plane (Coordinates 1274X 3668Y). The hatch can also be found, at coordinates 29584X 4363Y. Although a lot of this is explained in game in a mission provided by the Ular boys, the reference is too clear to be just coincidence. Also, once the mission is completed, all the weather phenomenon and plane explosions will no longer occur.

The island is inhabited by an army of 100 year old Japanese soldiers, who never found out the war was over. It is a reference to a real post-second world war myth, that enclaves of elite Japanese Soldiers remained in the deep jungles of the many pacific islands that remained untouched by the allies. Supposedly they had been ordered to keep on the fight for the empire even after the bombs were dropped. This combined with the various real life experimentation programs started by Japan's military during the war make Lost Island one of the most eerie sites in all of Just Cause.

Located at coordinates 10387X 23520Y. Not much to see here apart from well, an inland ship wreck (on a mountain). Surrounded by a small town (not marked on map) which contains some valuable crates.

Located at coordinates 30172X 14068Y is a replica of the Cape Canaveral Air Force Station, a famous rocket launch facility on the coast of Florida.

Located at coordinates 23440X 17420Y is the military base PAN MILSAT. This is in fact a replica of Puerto Rico's Arecibo Observatory, a massive radio telescope that many will recognize from its appearance in the James Bond film Goldeneye.

Located at coordinates 18207X 21543Y, at the end of a pier, there is a desk and a chair that appear to be a reference to the Will Smith movie, I Am Legend.

Located at coordinates 29611X 31332Y. The whale can be destroyed allowing you access to a armor crate.

Located at coordinates 23745X 13662Y. Rico is able to talk to the snowman but sadly only two sentences.

Next time you see a Baby Panay billboard try grapple onto his face and press the "enter vehicle button".

Located at coordinates 21902X 20264Y. On the ground you should see the words "banana fail" spelled out. However, you'll have to look closely because of long grass.

Located at coordinates 29110X 7392Y. Only viewable from above is a large surprised smiley face dug into the ground.

Located on the horseshoe island in the center of the map is a skull. Best viewed from the air in a helicopter/jet. The skull is on the front of the island on the front. It is, presumably a reference to King Kong.

Those who pre-ordered the game in the US were restricted to the piece of content that their chosen retailer offered; customers outside the US, however, could obtain all of the bonus content no matter with which retailer they placed their orders. Avalanche Studios responded to controversy over this by putting all pre-order DLC up for purchase after the game's release.

On the 8th of April 2010 Avalanche released the Chevalier Ice breaker as free DLC. Described in press releases as a "pimped up ice cream truck" it is a upgraded ice cream truck that can be purchased for $25000 in the in game black market.

On April 26th Square Enix announced that it would be bringing two new DLC Packs to Just Cause 2, they would retail for $1.99/£1.99

The Black Market Aerial Pack was released on April 29th and contained the following items:

The Black Market Boom Pack which is due to be released on May 25th will contain the following:

Just Cause 2 has an unofficial multiplayer mod that allows you to play with other players and cause chaos in Panau. The JC2 MP is not yet released but there are public betas that you can find on JC2-MP website. So far only purchased Steam copies of the game can run this mod and they do not plan to make it on Xbox or PS3 ever. The moderators can change the character models of players but as of yet the player has no choice. The AI/NPC's will not be as present as in the singleplayer. The mod does not effect your singleplayer game in anyway however. You can chat with other players by pressing "T" and all player have unlimited ammo.You can not access the black market tho. During the beta all DLC is disabled.

Progress Update January 12, 2013, 9:21am
The past 2 months have been the most productive days of development the project has ever seen. We brought on another developer, Philpax, which sparked a development roar as the two of us pushed feature after feature, and squashed bug after bug.
We've been working on some major features and are nearing a feature freeze. What this means is that no more features will be implemented for 0.1, and our focus will turn exclusively to improving stability and squashing bugs.
The Lua API has grown extensively since the last test, and you can expect a much more engaging experience thanks to a feature we have decided to keep quiet until the test. We have replaced our rendering engine with the very popular UI framework, CEGUI. This has seen a dramatic improvement to framerates, and enables us to greatly improve the user interface.
We will be holding a test in the coming weeks, although it is likely there will be a much smaller test held earlier to members of our IRC channel to test specific areas with a lower player count.
Keep your ears and eyes poised on Twitter and Facebook as these are the channels we will be announcing the test through.
Trix

On March 4th, a demo for the game was released on Xbox Live, PSN and PC. The demo placed players in 35 square miles of the desert area in Panau, allowing 30 minutes of gameplay in each playthrough. Players who racked up enough Chaos were allowed to take part in one of the Faction Missions for the Reapers, and eventually unlocked the Black Market, allowing them to upgrade their weapons and call in vehicle drops. A Challenge Mission was also included, in the form of an airborne race in which players flew vehicles through rings against a timer in order to earn money.

The PC version of the demo was found to contain some content from the full game that could be accessed by editing the demo's configuration and .ini files. 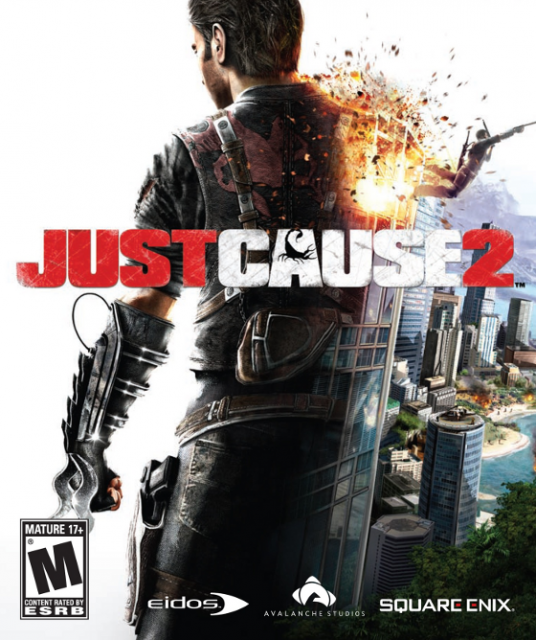