A Japanese interactive movie game that emulates Dragon's Lair in both gameplay and use of hand-drawn animation. Also known as Triad Stone on the Pioneer LaserActive add-on Mega-LD, the game is basically Dragon's Lair but with Anime.

Released a little over a decade after the initial popularity of Dragon's Lair, Strahl or Triad Stone as it's originally titled is what now is known as a Quick Time Event game. The player watches a hero go on their adventure, rendered in hand-drawn anime style, in anticipation of a crucial moment that leads to failure or success hinging on a swift, often directional, button press. In addition to directions the player is also occasionally tasked with mashing buttons to fill a meter in which some guy yells "Power! Power! Power!."

As featured in the game's commercial shown in Japan, the hero runs away from giant logs, turns right at the correct time, and fight golems or something. Generally there's a lot of Dragon's Lair stuff going on like jumping from crumbling platform or grabbing onto a pyre floating down a lava river. 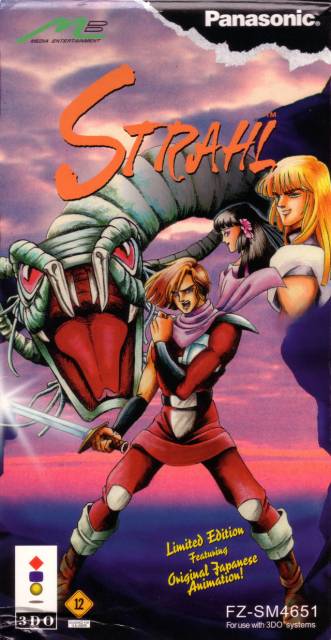