In this sequel to Activision's unique first-person/real-time strategy PC game, players are tasked with combating a new, unknown enemy at the edge of space.

Battlezone's alternate-history cold war is over. The USA and USSR have joined forces as the ISDF (International Space Defense Force) against the Scions, an alien race that has begun terrorizing the edges of the solar system. An investigation of an attack on Pluto reveals a "Dark Planet," and players, as Lt. John Cooke, are tasked with carrying out various missions there.

Battlezone II is a unique mix of first-person shooter, vehicle shooter, and real-time strategy. For example, the player can pilot a vehicle around the map, then hop out, enter a building, and command forces from an overhead perspective. Tasks like directing units and building structures can be done from any mode with the help of the function keys, which are bound to unit groups and constructor units. Basic real-time strategy elements are present in the game, such as tech trees and harvesting resources to build units.

While pre-launch enthusiasm for the game was high, this quickly dissipated upon release. Buggy gameplay and steep system requirements marred the game's reputation, even after a significant number of issues were alleviated by patches. The game still managed to receive a few positive reviews, but did not sell particularly well. 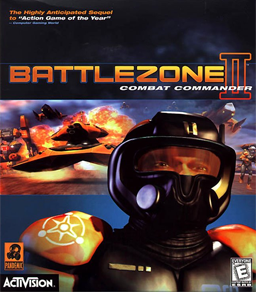