You assume the role of Wraith, a SEAL team leader tasked with hunting down an ex-KGB agent who is believed to know about a potential terrorist attack on the United States involving WMDs (Weapons of Mass Destruction). The story is set in a fictional ex-Soviet country.

Gameplay in Fireteam Bravo 3 revolves around you and your team. The game is marketed and plays as a tactical shooter. Generally, you have to move slowly to avoid dying, as you will not survive multiple bullets. Health does regenerate, however, you are wiser to move your team into position first. Your team is built up of Toro, Sandman, and Raven. You can command these soldiers to do your bidding - be it defusing an objective, or blowing one up.

Weapons in the game are unlocked through earning points. You can earn points in custom missions, and in campaign. Weapons generally cost around 3000 points, and this is a reasonably high figure. Many weapons in the game are renamed slightly from their real-world counterparts in order to avoid copyright issues. However, the weapon names are almost always extremely similar to their real names, and in some cases, weapons have their real names (such as the AK-47, as the name is not owned by any company). Weapons can be outfitted with different scopes and attachments, such as Laser Pointers and scopes. The game features the FAMAS assault rifle, which is supposedly the only assault rifle capable of mounting a Thermal Scope.

As well as unlocking weapons, players will need to spend points on attachments and equipment. You can purchase Claymores and other equipment for points as well as optics for your weapons. Attachments available for weapons vary, though for many assault rifles at least, you can mount a Masterkey shotgun underbarrel, or an M203 grenade launcher. There are multiple modes of play for Fireteam Bravo, and these are:


Additionally, the game features different difficulty modes, to accommodate for different player skills. These difficulties are:

Like many games, Fireteam Bravo 3 has different cover art for both the European version of the game and the American version of the game. Both boxes look similar, though they are different. To the right is the American boxart for the game. It features the player's character, Wraith, in the foreground as well as one of his team mates and a UH-64 Black Hawk helicopter.


The European box art for the game is extremely similar. However, the top of the box is slightly different. US PSP game covers have
been brought more in line with the design used for the newer model PS3 Slim's redesigned boxes. However, the European PSP game boxes remain more faithful to the design of the PS2 boxes. Other than this, the only real difference between the boxes is that Wraith has his helmet visor down. This may be to keep more in line with the style of the British forces.

Fireteam Bravo 3 generally received mixed reviews. According to Metacritic's 43 critic reviews, the game currently stands at 74/100. The highest of these scores was given by TotalPlaystation, who gave it 85/100 and have been attributed with the quote:

Fireteam Bravo 3 is definitely not a flawless portable experience, however that doesn't mean that it's not a ton of fun to let your team breach and clear rooms full of terrorists.

Meanwhile, the lowest score given by GamePlayer Sweden. They gave Fireteam Bravo 3 only 40/100, and have been attributed with the quote:

A bland and un-engaging tactical shooter with the typical PSP-problem: lousy controls. Gray and boring environments in a fictional ex-soviet state, evil terrorists with weapons of mass destruction and, yes, we have heard it all before. 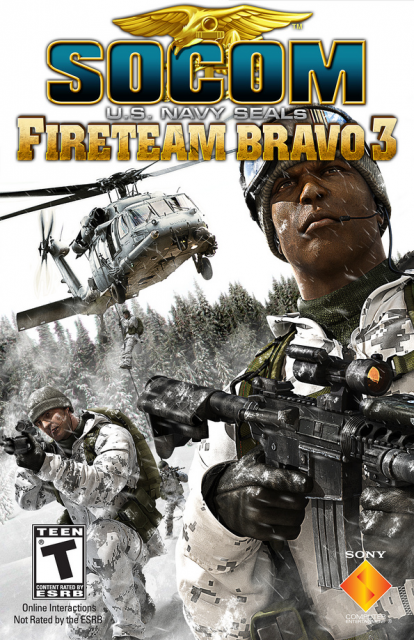