Duke Nukem Zero Hour is a third person shooter adaptation of the popular adult themed Duke Nukem saga. Much like Duke Nukem: Time to Kill, this was the second game in the series to go third person. Many fans skipped buying Zero Hour in wait of the true sequel to Duke Nukem 3D, Duke Nukem Forever, but D.N.F was later delayed until 2004, and has seen its production halted due to financial issues and subsequent shut down of 3D Realms.

*The Duke Nukem rights were then purchased by Gearbox and D.N.F was finally released June 14, 2011.

This time around Duke Nukem is called out by the United States government, as the Earth is being invaded by hordes of aliens. Duke is called in to assist in the fighting off of the invading forces. Early on, Duke Nukem fights his way through the now war consumed New York City, alongside U.S. Marines until he arrives at the alien stronghold near the collapsed Statue of Liberty. Here, Duke Nukem discovers that the aliens are using time travel to go back in time and mess around with famous human events to cause humanity to weaken, therefore making their invasion of current day Earth much easier. Meanwhile, Duke continues to fight in current day New York, but is teleported into the future by an alien battle-lord.

In the future, players are greeted by an ugly post- apocalyptic world where the only surviving human beings are zombies and mutants and lumber about the wasteland. The World is war consumed and Duke Nukem fights his way through the wasteland until he locates a Resistance group. Together, Duke and the freedom fighters cooperate to fight the alien oppressors. They fight in future New York in search of the old U.S. Army command center, there, the resistance and the remains of the U.N. had made their own portal to go back and fix the past to restore humanity.

Duke Nukem jumps back in time to the Wild West era in the 1800s and later goes to Victorian England in the 1700s. Here Zombies litter the streets and brains and intestines flood the city. Duke assaults a castle and kills one of the Alien overlords. In a final push, Duke returns to the modern day New York to finish off the Alien Commander, Zero. Duke enters the alien mother ship and kicks zero's alien ass. Duke Nukem once again saves Earth and prepares for some much needed R&R. 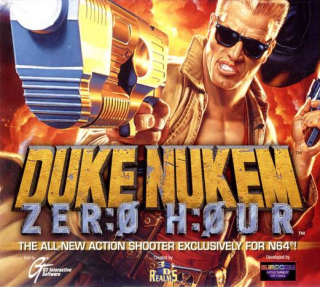