The first game from Overkill Software (headed by the founders of former studio GRIN), Payday is a fast-paced crime-themed first-person shooter that lets teams of players conduct robberies and other criminal activities while fending off waves of cops.
PlayStation Network (PS3)

Payday: The Heist is a co-operative crime-themed first-person shooter developed by Overkill and published digitally by Sony Online Entertainment (later as Daybreak) for the PlayStation 3 on October 18, 2011 and the PC on October 20, 2011.

Developed by ex-employees of the defunct studio GRIN (best known for the Ghost Recon: Advanced Warfighter series and the Bionic Commando re-boot), Payday lets up to four players team up as modern-day masked robbers as they perform numerous fictional criminal activities (such as robbing banks, breaking a criminal out of police escort, and hijacking an armed transport of gold bars), all of which end up messy (with the crew using unconventional means to solve problems while eliminating a seemingly-endless supply of law enforcement, from regular troops to heavier special units). Assisting the team is their handler: the mysterious Bain.

Along with special updates (including a cross-promotion with Valve's Left 4 Dead series) and an expansion DLC, the game later received a full-blown sequel (which has received numerous upgrades and alterations, including a wide variety of game updates and new content since its release). Most of the game's levels were later re-made into its sequel, each of which were enhanced to fit the new engine.

Players can choose to play as either an assault, sharpshooter, or support class. Each class can be leveled up over the course of play, and as new levels are reached, new weapons, items, and abilities become accessible. Abilities affected by the leveling system include healing, ammunition dispersal, and binding hostages. Respawns are determined by the number of hostages the player is willing to trade. Objective locations and path requirements vary from session to session, and some optional objectives become available at times that, while not required, can speed up the players' progress in the mission when completed.

Over the course of a mission, the police will come in waves and the AI will adapt based on the player's performance. Police officers utilize a variety of armaments, including smoke bombs and tasers, and some wear heavy armor, requiring more firepower in order to successfully take them down.

Each player choose from four playable characters, each with their own appearance, voice, and backstory:

Although players have three weapon slots at their disposal, they only start with two weapons (AMCAR-4 and B9-S). By leveling up their particular Skills, they unlock new weapons. The base game includes 8 unlockable weapons, with 3 additional weapons if the player owns the Wolf Pack DLC.

The base game includes six different levels, also known as "heists". They can be played in any order and have their own dedicated soundtrack (which is affected by the mission status). 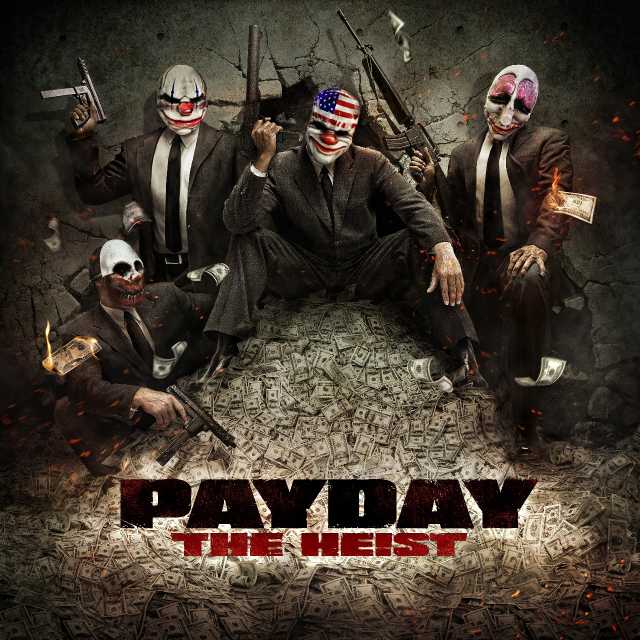