A PS1 RPG in the vein of Zelda, Alundra has the player control a psychic youth as he combats an ancient evil that threatens to overwhelm the peaceful village of Inoa.

Alundra is a fantasy action adventure with hand-drawn 2D art that blends traditional action adventure elements with more streamlined exploration mechanics akin to those in the Legend of Zelda franchise. Developed by Matrix Software and originally published by SCEI in Japan, It was later released by Working Designs in the US and Psygnosis in Europe. In 2010, the Working Designs version was re-released on the Playstation Network by Monkeypaw Games.

Known as "The Adventures of Alundra" in Europe, the game is viewed from a top-down perspective where the player takes control of a young boy named Alundra who realizes not long into the story that he has the ability to enter people's dreams and reveal their inner demons. The game is a real-time action adventure where enemies can be engaged where they stand with quick weapon strikes and puzzles must be solved using intelligence, skill and agility as the player attempts to navigate the game's numerous settings and landscapes to further the storyline. These action elements are blended with more traditional RPG components such as strengthening Alundra's attributes over time and collecting an array of skills, weapons, armor, and useful items.

Alundra's gameplay is very much in the same vein as the early Zelda games, a top-down 2D world in which the player can move up, down, forwards and backwards. Alundra will encounter enemies in real-time in the environments, and can attack them on the spot using a variety of weapons including swords, flails, bows and wands. The player will acquire these weapons as they progress through the main story, which is both a lengthy campaign and challenging. Alundra has plentiful puzzles, some of which will require the player to pull off some quick moves, and platforming style challenges. Other puzzles require much more thought and attention. The game is well noted for having some extremely difficult puzzles which will challenge even veterans of similar games.

Alundra's soundtrack consists of one CD and includes 26 songs in all. Some songs from the game were not included in the game due to them being the same song, but using different instruments. The soundtrack was composed by Kohei Tanaka 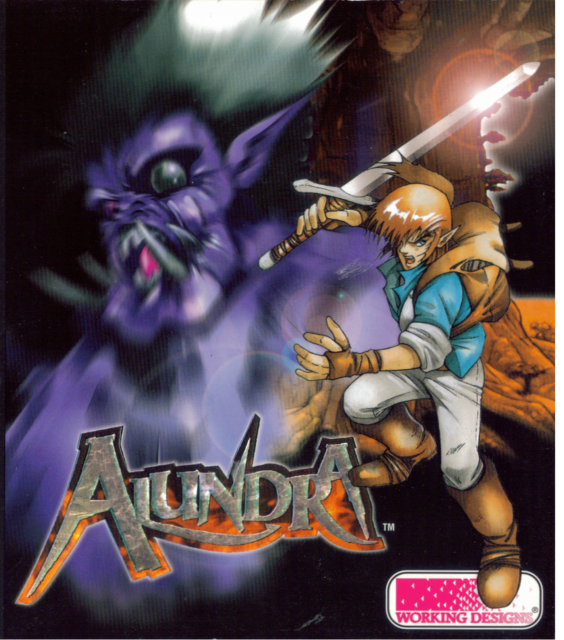