An action maze game where a mouse policeman has to find stolen goods in a house filled with crooked cats.
Game Boy Advance

In Mappy, the player is the titular police mouse whose goal is to recover stolen electronics stashed away in Nyamco's hideout. To do so, he'll have to avoid Nyamco and his kitty flunkies, the Mewkies. Mappy can slow them down by shoving a door in their face, ringing a bell to stun them, or even get rid of them for good by putting them in the microwave.

Scoring features a multiplier if Mappy gathers items in pairs. The items are:

With the radio being worth 100 points, increasing in 100 point increments with the safe being 500.

If Mappy takes too long gathering up the stolen goods, a warning will issue, and then an indestructible enemy will appear and chase Mappy throughout the level. Unlike with the cats, should the enemy meet Mappy in midair he will get hit. There is also a limiter for how many times a player can use a trampoline in a row. Should Mappy bounce too often on one it'll break, causing him to fall and die if there isn't another trampoline below to break his fall.

Mappy: Mappy is the lovable mouse cop hero of the game. He can jump on trampolines, stun Mewkies and Nyamcos with doors, and confiscate stolen items. He also has a billy club that he doesn't use.

Mewky: Mewkies (also known as Meowkies in the US version), are the little pink kitty flunkies of the bigger cat mastermind, Nyamco. They will chase after Mappy if they see him. Mappy can knock them silly by opening doors on them, or temporarily get rid of them with the flashing microwave door.

Nyamco: Nyamco (also known as Goro in the US version), is the big head honcho cat crime boss. He will also chase after Mappy if he sees him. Sometimes, he'll hide behind a random electronic item and if Mappy takes the item he's hiding behind, he'll score a sweet score bonus for catching Nyamco red-handed. Nyamco is also vulnerable to door slams and the microwave door.

Mappy was a modest success in arcades, but disappointed compared to prior hits like Xevious and Pole Position. Namco had a surplus of unused Mappy boards which would eventually be cannibalized into The Tower of Druaga boards once that game became a smash hit in Japan.

The Game Gear conversion of Mappy shares many similarities with the Famicom port, including a truncated level layout with five floors instead of the arcade's six, and unused sprites. It also includes competitive multiplayer via a link cable, and a unique mode titled 御先祖様の挑戦 ("Challenge of the Ancestors"). This mode features more sprawling level layouts in a high rise setting, with trickier trampoline placement, and the ability to drop items from holes in the ceiling onto foes below. It also features a unique sprite that is clearly a Sharp X68000 home computer. 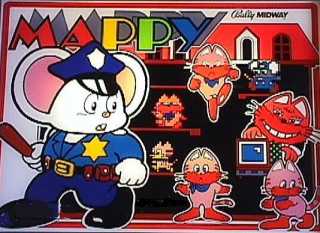