The third release of the Dragon Warrior franchise saw the story take a trip back in time before one and two, taking up the sword of the warrior of legend, Loto. In this game the hero sets out to destroy Baramos after his/her late father Ortega fails.

Dragon Warrior 3, or Dragon Quest 3 in Japan, is an RPG and the third of four Dragon Quest games for the Nintendo Entertainment System/Nintendo Famicom. It is a prequel, setting its story before the first and second games.

Dragon Warrior 3 represented a number of leaps forward for both the series and JRPGs in general. The original Famicon version of Dragon Warrior 3 not only had improved graphics over its predecessors, but also an improved user interface, a larger and better developed game world, and a much more complex story line. The robust class system was also quite innovative for console RPGs at the time, and the ability to change classes part of the way through the quest added even more depth. Dragon Warrior 3 also debuted a unique Day/Night system that has been an established feature of the series ever since. The Day/Night system allows time to pass while the party moves about on the overworld map. The effects of the system were more than just cosmetic as towns and castles could change remarkably during the night and some characters and quest objectives could only be encountered at a specific time of day.

The game was rereleased several times:

In Dragon Warrior 3, the player controls a party of four. Dragon Warrior 3 was the first Dragon Warrior game to implement a robust class system, allowing the player to control both gender and class of the party members. The main character was a special "Hero" class, with both strong physical attacks and magic. In the original NES version, the initial classes to choose from are Soldier (high defence and attack), Fighter (fights unarmed and with claws), Wizard (attack magic), Pilgrim (healing and support magic), Merchant (finds extra money), and Goof-Off (high luck). Additionally, the Sage class is unlocked during the course of the adventure and other classes can transform into this advanced class. Later versions of the game on Super Famicom and the Game Boy Color added a Thief as an additional class as well as expanding the abilities of some of the original classes.

Battle System and Leveling Up

Dragon Warrior 3 has a traditional turn-based battle system. Monsters are encountered randomly on the overworld maps and in dungeons. Defeating monsters yields gold and experience. As party members level up, attributes increase and new spells are automatically learned. Interestingly, the distribution of new attribute points and the exact level at which new spells are learned is somewhat random, and can fluctuate in different playthroughs. Spells are cast using a traditional MP-based system. Because the primary method of regaining MP is staying at inns, the player had to be careful with MP management, so as not to run out in the middle of a dungeon. An interesting innovation of the game was battle arenas scattered in some towns throughout the world. In these arenas, the player could bet gold on the outcome of computer controlled battles between sets of monsters. Odds were given before the fight and betting on unlikely victors could mean big payoffs.

Dragon Warrior 3 takes place before the events of the first two games in the series. Additionally, the game begins in an entirely unique world, although the party will eventually travel to the original world, Alefgard, as well. At the start, the main character leaves his/her hometown of Aliahan, tasked with defeating the Arch-Fiend Baramos, who is out to destroy the world. The search for Baramos takes the party across the world. Upon defeating Baramos, the party is surprised to learn that their quest is not over. Zoma, who was Baramos' master, reveals himself and opens a portal to the dark world, which is Alefgard from Dragon Warrior 1 and 2. In order to defeat Zoma, the hero must first collect a number of artifacts scattered throughout Alefgard. Interestingly, these artifacts were the same as those gathered in the original Dragon Warrior game. The party will also encounter Ortega, the Hero's father, during the course of the adventure. Ortega had travelled to Alefgard as well in an attempt to defeat Baramos, and dies shortly after the encounter. Once the artifacts are gathered, a Rainbow Bridge appears, allowing the party to enter Zoma's castle and defeat the great evil. 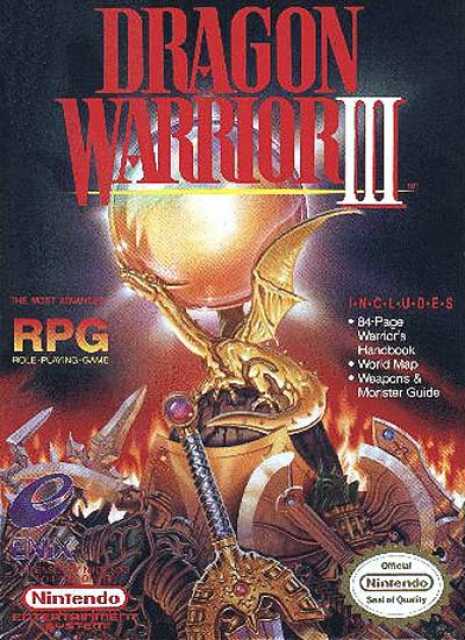