Caesar has been murdered within the Roman Senate and everywhere looms conspiracy. Only Agrippa and his close friend Octavianus dare to search for the truth in this hybrid stealth-action/hack & slash title from Capcom.
PlayStation 2

Shadow of Rome is set in the Julio-Claudian dynasty in the Roman Empire and gameplay alternates between gladiator combat and stealth sections. The story takes place mostly in the gladiatorial arena, but there are several sections that have the player exploring smaller town-like areas, or the inside of Roman Palaces. The action also leaves the arena sometimes and cuts to battles that take place in the wild.

The supposed sequel project to this game (probably due to low sales) was turned into a different themed game with different approach but it retained some of Shadow of Rome's DNA, the game is 2006's Dead Rising.

There are 2 main types of game play in Shadow of Rome. You start off by competing in weapon-based close combat battles, where the player, Agrippa, fights in several gladiator arenas throughout the Roman Empire. Secondly there are puzzle-solving stealth-based adventure levels where the player takes control of Octavanius, Agrippa's friend, and the newly deceased Caesar's nephew.. These sections take place in the main quarters of the Roman Empire and its vicinity of power. The player also controls Agrippa in chariot based races, and battles that took place before he was confined to the arena. The player views the the hero in third-person view and there are two difficulty levels, Normal and Hard. However, once the player beats the game, an Extreme option is unlocked.

There are 4 chapters which make up the game: "The Wickedness of Men", "Baptism by Fire", "Wrath of the Gods", and "Restoration to Glory". As the game progresses, the player will find new weapon types and enemies, as well as new arenas. No weapons are permanent though,as after extended use, they often break. Players must learn to juggle multiple weapons, as well as appeal to the crowd at special moments in order to get new weapons. With Octavanius, the player has the option to collect special silver and gold coins which are used to purchase special and unique items at the City Gates from various merchants. However, most of these are decorations for Octavanius' room and serve only to increase the number of costumes and haircuts that may be unlocked. There are 3 ranks that the player can achieve in arena battles: Bronze, Silver, and Gold. These ranks unlock many different secret mini-levels, quests and cheats. Competing in any arena battle unlocks it in the Battle Selection menu; this allows the player to replay any arena battle for fun or to increase skill for the harder battles.

This is the main protagonist of the game. His mother was killed by Decius, and his father arrested, after being framed by Marcus Brutus for the murder of Julius Caesar himself.

The second protagonist in the game. He is the friend of Agrippa and is the adopted nephew of the newly slain leader, Julius Caesar. Octavanius' main goal is to find the true killer of his uncle and clear Agrippa's father.

A female gladiator who has been freed. She helps Agrippa throughout many missions in his quest to save his father.

Sextus is Claudia's brother and leader of the gladiator school which Agrippa attends. He is a good leader with a deep hating for the Republic of Rome.

Antonius is the successor to Caesar. He is an ambitious man who will stop at no limits to get what he wants. He is also friends with Decius.

Decius is a mighty general of Caesars. He is extremely ambitious, and together, he and Antonius are a dangerous team. He is ruthless and is responsible for starting the feud between himself and Agrippa when he killed Agrippa's mother in the forum.

A devout follower of Caesar, he was responsible for suggesting the gladiator competition to the Senate, and set in motion the events that would lead to the revelation of greatest secret he knows.

The plot is centered around the assassination of the Roman emperor Julius Caesar. Antonius becomes crowned the new Emperor of Rome after the murder of Caesar; he quickly becomes loved by the Roman populace after he promises to lead them to glory and victory.

The General of one of the legions, Agrippa has just been told about the murder of Julius Caesar. Shocked, he returns to the Foro Romano, where he is told that his father, Vipsanius, has been framed for the murder. To make matters worse, his mother has been condemned to death. Agrippa cannot accept this, and decides to free his mother by killing her guards. Before they can escape the city, however, she is killed by General Decius, who then defeats Agrippa in battle. Before he is killed, however, Agrippa is rescued by Claudia, a female gladiator. After they are safely away, she tells him that a tournament is to be held to determine Vipsanius' executioner, and that Decius is to compete in the final round. Knowing he cannot return to Rome a free man, he decides to become a gladiator and compete in the tournament in an effort to save his father.

Meanwhile, Octavianus, with the help of his mentor Pansa, decides to look into the matter himself. Through various endeavors into the Roman Senate, he finds out that indeed, Vipsanius is not the true murderer of Caesar. The dying Cicero informs Octavianus that a group of conspirators are the ones responsible for the murder. One by one, select Roman Senators are murdered, leading Octavianus to believe that someone does not want them to talk.

As Agrippa continues to advance in arena rounds, he learns that his owner, Sextus, has more than his share of secrets. Towards the end of the game, he accepts a proposal from the Egyptian twins Iris and Charmian, whose mistress is hinted to be Cleopatra, to assassinate someone of great importance. He then disappears for a time, only to reappear an assassin. His father, Pompey, was defeated in battle by Caesar's troops, and Sextus wants revenge. Since Octavianus is Caesar's immediate family, and thus true heir to the throne, Sextus goes after him, but is stopped by Claudia. Octavianus is arrested for his snooping by Maecenas, Antonius's secretary, soon after.

During the final, decisive match between Agrippa and Decius, Maecenas reveals to the masses of Rome that Caesar was not killed. Instead, his assassins murdered a double. They were employed by none other than Antonius, who found out that he was not really Caesar's heir. In the ensuing argument, it is revealed to the public that Decius is the Caesar double's true killer. The tournament was articulated by Maecenas in order to reveal the conspiracy and Caesar's true heir to a wide audience. Outraged, Antonius orders Decius to murder Maecenas, Vipsanius, and Octavianus, but Agrippa steps in, and defeats Decius for the final time.

Antonius decides to fight Agrippa himself, but loses. As guards take him away, Sextus and his army climb the walls of the Colosseum and demand Antonius. A fight then develops, and in the chaos Antonius escapes. Agrippa rejoins the Roman army in taking back the streets from Sextus' army, joined by Claudia soon after. As they meet Sextus at the docks, Claudia pleads that he not fight Agrippa, but is knocked away. She regains consciousness just as Agrippa stabs Sextus. Agrippa himself begs him to give up, but before Sextus can respond, Antonius' ship fires at a lighthouse behind Sextus. As it begins to fall over, he begins to reminisce about his early days with Claudia. He calls out to her one more time before the lighthouse falls and crushes him. Agrippa and Claudia mourn his death, and Agrippa decides to go after Antonius along with the Roman navy.

After reaching the flagship, Agrippa battles Antonius, and defeats him. As he and Octavianus return to Rome, they are given a hero's welcome. The two find Claudia mourning Sextus on a cliff overlooking the docks. She tells them that she is leaving Rome to travel the world. As she leaves, Agrippa asks her to come back and visit some day. She smiles at him, turns away, and walks off. Octavianus vows to seek the Pax Romana, and Agrippa vows to help him any way he can.

There is a final game revelation after the end credits. Iris and Charmian ask each other if they're ready, and state that it's time to tell their mistress that they've reached the end of the beginning. 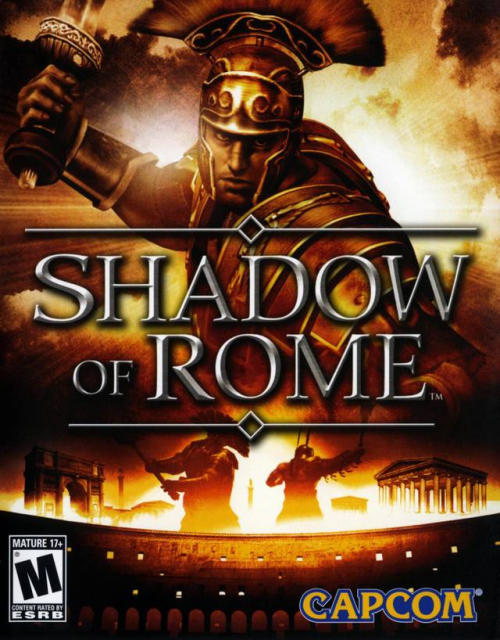