Spyro the Dragon's fourth adventure, the first home console entry in series not developed by Insomniac Games and first game of the PS2/Gamecube/Xbox era.
PlayStation 2

order to weaken the new born Dragons. In the process Ripto’s spell accidentally misfires, which instead scatters them across the world. Spyro, along with the help of Sparx, Hunter and Bianca must begin a search to recover all of the lost Dragonflies and defeat Ripto once again.

The gameplay is almost identical to that of the previous Spyro titles with the exception of a few new abilities and vehicles. Spyro has his original default set of skills:

One of the new additions to the game is the multiple breathes, the player is tasked with collecting 4 Magic Runes each corresponding to a specific ability, and returning it to the Spirit Dragon in the Dragon Realms.

Fire Breath – This is a default ability Spyro will have from the very start of the game, it can be used to defeat most enemies with the exception of those wearing armour.

Bubble Breath – The first new ability you will learn, its only use is to capture the missing dragonflies.

Electric/Lightning Breath – Used in much the same way as Fire breath, it can

also be used to power machinery and is more effective against some specific enemies.

Ice Breath – Freezes enemies leaving them vulnerable to being shattered into pieces.

Wing Shield – Ironically, having nothing to do with breath, Spyro shields himself with his wings from enemy attacks.

There are a total of 7000 gems to collect in the game of which there are 5 different types of Gems each with its own value:

playable in Enter the Dragonfly aswell as 2 new playable vehicles the Tank and Spitfire plane.

The original plot and features for the game is considerably different from that in the final release. It was to feature Gnasty Gnorc and Ripto teaming up to capture the dragonflies. It boasted 60 frames per second, over 25 levels and 120 dragonflies to collect. Due to pressure from Vivendi Games (then Universal Interactive Studios) the game was rushed for a release in Winter 2002. Ultimately the game suffered from an inconsistent framerate, numerous visual and sound glitches, long loading times and freezing. Gnasty Gnorc was written out of the storyline, only 9 levels and 90 dragonflies made it into the final release.

As a result of: the rushed development, numerous glitches, long load times, bad framerate and lack of the promised content, Enter the Dragonfly was panned by almost all critics and is widely considered to be the worst game in the franchise. The GameCube version is hailed as the best version, with less glitches and shorter load times. 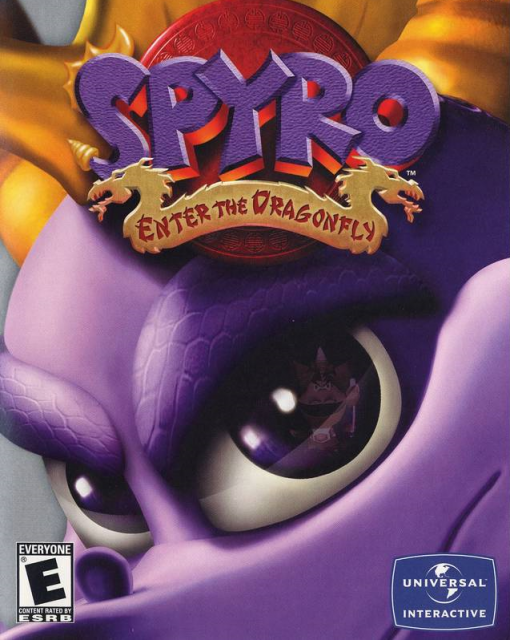