A top-down shooter where one or two bandana-wearing commandos fight enemy forces in a jungle. It is notable for allowing the player to pilot various vehicles including a tank and a helicopter.

Ikari Warriors, first released in 1986, was SNK's first true Arcade hit in the United States. Its distinctive controls and two-player mode set it apart from other top-down shooters, such as Commando. In Ikari Warriors, the players controls Ralf Jones and Clark Steel, two characters who later joined the King of Fighters roster. Players take control of Ralf and Clark, and fight through enemy units to try and save the village of Ikari.

Ikari Warriors can be played single-player or two-player co-op. The game is seen from a top-down perspective, with players seeing the top of character's heads. The players are on the bottom of the screen, and advance upwards, while fighting through hordes of enemies. Players must be aware of how much ammunition they have, as it is limited. Tanks, which have armor that prevents our heroes from taking damage, can be commandeered throughout the game. However, they will eventually be destroyed by enemy fire.

The original Arcade version of Ikari Warriors allows players to move in one direction while firing in another. This is accomplished via a rotating joystick that allows players to aim in any of the eight movement directions. This style of gameplay made Ikari Warriors tough to duplicate in the numerous ports and remakes of the game that appeared on home consoles, with some, like the NES version, ignoring the feature completely and only allowing players to fire in the direction they're facing.

Clark and Ralf were required to move quickly in the game. If they loitered for too long, red spots, or tracking fire, would appear below them to get them on the move. Also when playing co-op if one player moved faster than another the slower player could become stuck and would die as a result.

The NES version of the game also has one of the most notoriously easy codes in the history of the system, which allows the player to continue from where they left off by pressing A, B, B, A after their last life is lost. The NES version also had a few bugs, like one co-op issue where a player would get dragged through some impassable object by the way the screen scrolls. After passing through the object, the player would be invincible to enemy fire, but invisible walls would often make forward progress tricky or even impossible. 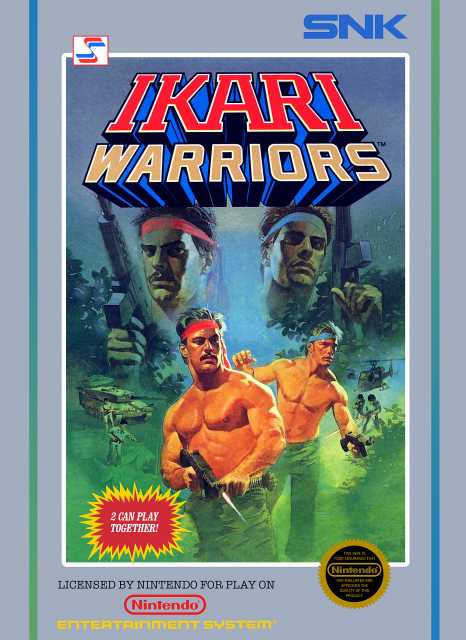