The sequel to Saurus's run-and-gun arcade game pits a new group of elite soldiers in a new setting (involving a maniacal corporation building an oppressive empire).

The sequel to the original Shock Troopers, 2nd Squad revamps many of the original game's concepts (such as removing the Team Battle mechanic and adding rideable vehicles) while adding a brand new story (involving the sinister DIO International Corporation, who has formed a rogue nation and is building a military empire) and a new group of rebel soldiers (including "Lion Heart" Leon, "Ceramic Arms" Angel, "Lightning Eyes" Lulu, and "Ice Brain" Toy). It also relies more heavily on pre-rendered 3D graphics.

Unlike the first game, 2nd Squad was released for the Neo Geo AES (exclusively in Japan on June 24, 1999).

Your job is to shoots various enemies on screen and defeat the boss character at the end. You're able to shoot in one direction while walking in the other. You have four characters to choose from, each with their own type of weapons. As in most shooters the characters can power up their weapon and do a lot more damage. You characters can also ride enemy vehicles as well. The game allows you to chose different paths in the opening stages of the game. No matter what direction you chose, the final couple of stages still take place at the evil corporations headquarters. 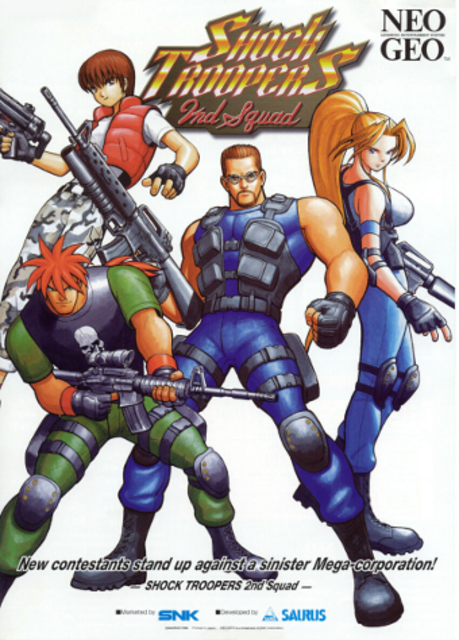