Medal of Honor Rising Sun moves away from Europe and into Asia where the enemy changes from the Nazis to the Japanese.
PlayStation 2

Medal of Honor: Rising Sun is another game in the popular World War 2 franchise. As the title suggests, the game doesn't take place in Europe, like several other games in the franchise, but in Asia against the Japanese forces.

You play as Cpl. Joseph Griffin of the US Marine Corps. The game starts off with the attacks on Pearl Harbour and to help out, you man anti-aircraft guns and shoot planes down. From there, you ship out over to Asia after War is declared on Japan. You will then find yourself in several different locations in Asia as the game progresses. The environments are tropical and not at all like what you may be used to seeing in World War 2 games, but there is a standard gray aircraft carrier and an office building level at the end of the single-player game.

Rising Sun plays like previous titles in the series and you can expect much of the same kind of gameplay that Medal of Honor has offered in the past, just in a different environment and fighting a different enemy. Like all early Medal of Honor games, the "aim" button simply zooms in slightly, unlike Call of Duty and similar games that have the player look down the iron sights.

Medal of Honor: Rising Sun had both online and offline multiplayer and featured 2 online modes, Deathmatch, a free for all, and Team Deathmatch, where two teams face off against each other to see which team can get the most kills. The offline multiplayer includes 8 maps for Deathmatch with 4 people using a Multitap. You could fill in the match with AI's to have up to 8 players. The matches allowed you to play by yourself to train against AI opponents. The Gamecube however only has local multiplayer.

The Soundtrack for Medal of Honor: Rising Sun, was composed by Christopher Lennertz. After the game's release, promotional CD's with the soundtrack were handed out. Even later, the Soundtrack was released in online music stores such as the iTunes Music Store. 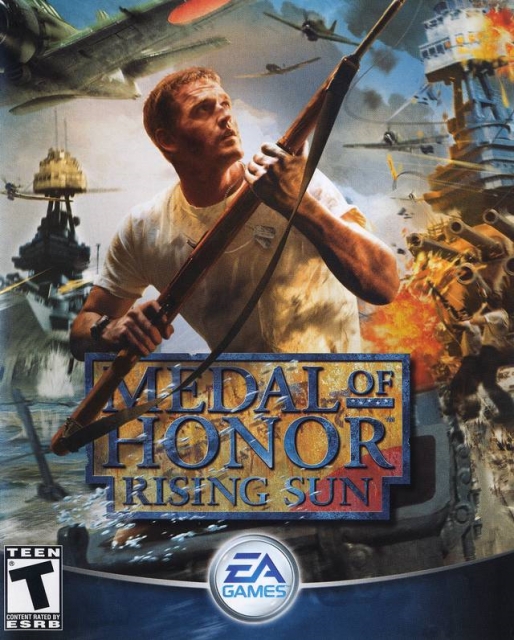